Why the Christmas Tree Is Christian 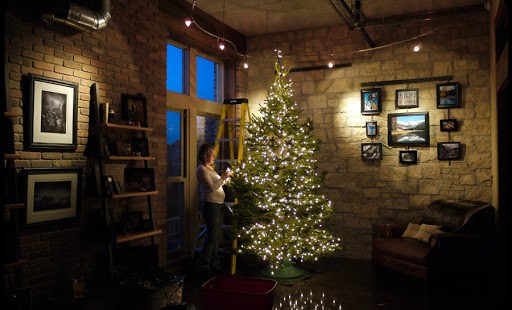 A story of Old England and Germany

Christmas is the darkest time of year in Northern Europe and North America. In these frigid lands, the Christmas tree is a potent Christian symbol, a light shining in the winter darkness. Its evergreen foliage enlivens our bleak and barren winter landscapes at a time of year when broadleaved trees stand bare, desolate and skeletal.

But how did conifers, pines and firs become such recognisable symbols of the Feast of Christ’s Nativity?

‘Today I have two children of my own who are full of happy wonder at the German Christmas Tree and its radiant candles.’

It was the 8th century Benedictine monk, St. Boniface of Crediton, in the Anglo-Saxon kingdom of Wessex, who first took the Gospel to the Germanic tribes of Northern Europe.

Unlike the Germanic Anglo-Saxons of England, the Germanic tribes of mainland Northern Europe were still pagans. They worshipped Odin, Thor – fierce and ancient Norse gods. One of the savage aspects of Germanic Norse religious culture was human sacrifice to appease their gods — especially Odin, the king of the gods and Thor, the god of thunder.

In England, Boniface knew that conversion to Christianity had subdued the wilder, more violent aspects of Anglo-Saxon warrior culture. He also knew it had appealed to their better nature. Boniface believed the same would be true of their Germanic cousins, and he was determined to end this barbaric practice when he embarked upon his mission to the Germanic tribes.

According to legend, Boniface let it be known among the tribes that when the next sacrifice was planned, he would personally prevent it. He gathered a group of his monks at an ancient oak tree considered sacred in Norse mythology. This was the place of blood-letting, where the Germans would perform their human sacrifices.

The sacrificial victim, a young girl, was bound to the oak tree in preparation, but before the fatal blow could be struck, Boniface grabbed the axe out of the executioner’s hands.

The Benedictine monk swung at the girl’s chains, whose links broke under the blow of the sharp blade. Boniface released the girl, and then turned his axe on the sacred oak tree.

As Boniface drove a huge gash into the trunk, the onlookers stood speechless, too stunned to move whilst the Benedictine continued to hack away. The oak crashed harmlessly to the ground, amidst a foreboding silence.

However, to the unarmed monks’ utter astonishment, the fierce Germans fell to their knees in terror. Anticipating the wrath of their gods for this sacrilege, the tribesmen were certain that Boniface would be struck down by a lightning bolt from Thor’s hammer, called ‘Mjolnir.’

The Origin of the German Christmas Tree

Undeterred, Boniface broke the silence. In a loud voice, he ordered the kneeling tribesmen to look closely at the base of the felled oak. There, springing out of the ground from between the roots of the oak tree, was a tender young fir tree, about knee high.

Boniface explained that Odin, Thor and their other gods had fallen with the oak but that Boniface’s God had given them this little tree which never loses its leaves and is full of life even in the depths of winter. He pointed out to them that the Fir tree’s leaves pointed upwards to heaven. He explained that this tree had evergreen leaves to remind them that the Christian Triune God’s love for them was everlasting.

At the first Christmas after this event, Boniface brought a fir ree indoors into church, a symbol of Christ’s everlasting love.

Because of Boniface’s efforts, the Germanic tribes were converted to Christianity. Boniface, who had become Bishop of Mainz, later founded a Benedictine monastery at Fulda. He lived out most of his long life in Germany, establishing Christianity there. He was martyred as an old man attempting to bring Christ to the Frisian Islands in the Netherlands on the 5th June, AD 754.

It was Boniface’s wish that his body should be buried in Germany, a country whose  people, he had come to love. So it was that he was buried at the Abbey of Fulda. He is now known as The Apostle to The Germans.

A Gift Among Nations

Since Prince Albert first established the tradition of Christmas Trees in Britain, a large tree is erected every year in Trafalgar Square. Since 1945, this is a gift from Norway  in thanksgiving for the UK’s support of Norway during World War II.

Clearly, the British have taken this German idea to their hearts, but most are unaware that it was an Englishman who gave the idea to the Germans all those years ago — and that it was a German who returned the gift.