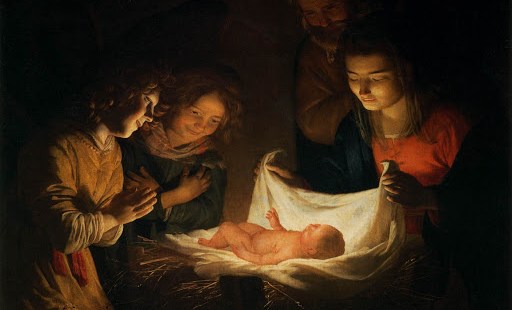 The crib and the rest of the Christmas tableau can be the starting point for mission, when Christmas is lived and celebrated through the world-transforming experience of Easter.

Wedged between Isaiah’s glorious messianic hymn and Luke’s touching account of the angelic announcement of the Nativity, Paul’s confession of Christmas faith to Titus (Titus 2:11-14) often gets homiletic short shrift at midnight Mass. Which is a shame, because those three brief verses are a compact, early Christian catechism, offering perennially valid points for Christmas meditation.

Paul begins with the early Church’s understanding of just-what-happened in Bethlehem: the “grace of God has appeared.” That saving grace first appears to the world in the form of a child, “infinity dwindled to infancy,” in Father Edward Oakes’s fine phrase; the divine epiphany, this showing-forth of the “grace of God,” reaches its dramatic consummation at Easter, when the fullness of God’s saving power is revealed. Thus in its very first sentence, the reading from Paul’s letter to Titus links Christmas to Easter, or, perhaps better, “reads” Christmas through the prism of Easter faith, without which Christmas faith would be little more than sentimentality.

Paul’s succinct catechesis continues with his reminder that this epiphany of grace has real-life consequences: it is not just amazing grace but also saving grace, by which we are empowered “to reject godless ways and worldly desires and to live temperately, justly and devoutly in this age.” And by “this age,” Paul does not mean only the Age of the Caesars; he means every age, including this age: this here-and-now in which we find ourselves, often tempted by the culture to reduce our humanity to a bundle of desires. To accept that diminishment of the human (however it may inform certain decisions of the U.S. Supreme Court) is to adopt “godless ways”; to live “devoutly” is to live “justly” by the power of saving grace, in conformity to the moral law that, as John Paul II taught at Sinai in 2000, was written on the human heart before it was written on tablets of stone.

The Pauline mini-catechism then points us from the past and present into the future: the saving grace that has appeared in the drama whose first act is Christmas and whose triumphant climax is Easter calls us to “the blessed hope,” which is “the appearance of the glory of our great God and savior Jesus Christ,” when the liberation of humanity and indeed of all creation will be complete, in that Kingdom where God will be “everything to everyone” (1 Corinthians 15:28). Thus in a few brief sentences, as biblical scholar Gianfranco Ravasi points out, Paul’s catechesis connects the great Christological events of salvation history to the final consummation of history, while reminding us that there is work to do now: for Christ “gave himself for us … to cleanse for himself a people as his own, eager to do what is good.”

As Pope Francis has forcefully reminded the Church in his apostolic exhortation, “Evangelii Gaudium” (“The Joy of the Gospel”), the work to which we are all called is evangelical and missionary. Every baptized Christian is baptized into a missionary vocation; everyone is called to offer others an invitation to experience the grace of God that has appeared among us, which is found in friendship with the Lord Jesus Christ. “Mission” is not something the Church does. Pope Francis teaches; mission is what the Church is. “The missions” are not exotic places from the pages of National Geographic; “the missions” are all around us, for every place we go, every day, is mission territory.

In pondering the grace that has appeared among us, we are called, the pope writes, to understand ourselves as “a community of missionary disciples” who are “permanently in a state of mission” in order to evangelize the world. The crib and the rest of the Christmas tableau can be the starting point for mission, when Christmas is lived and celebrated through the world-transforming experience of Easter. For the experience of the Risen Lord, which gives meaning to our adoration of the babe of Bethlehem, is an experience that demands to be shared—a gift that, to grow in us, must be offered to others.