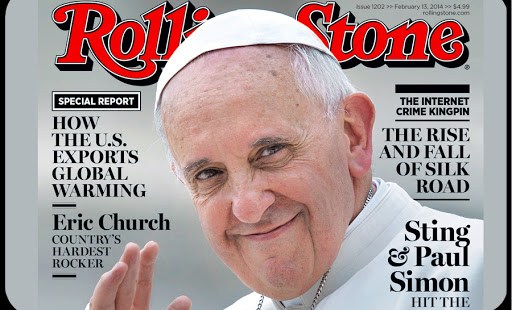 The popular press is at it again.

Pope Francis is busy racking up magazine cover appearances. Within the last few months, his smiling face has graced the cover of Time as their Person of the Year. The New Yorker featured him front and center, as did the Italian edition of Vanity Fair and an American gay activist magazine, Advocate. Now the Pope headlines Rolling Stone magazine with a 7,700 word feature article entitled “Pope Francis: The Times, They are A-Changin’.”

In addition, the pop culture Pope took on a new appearance this week on a wall in the area of Rome called the Borgo, just outside the Vatican gates. The Pope – complete with a billowing cape – is shown flying up, up, and away like a superhero.

I hate to rain on the parade, but before too long, the masters of pop culture will probably be voicing their disappointment with Pope Francis. The change they see is mostly a change in style and emphasis. The change they want is not likely to happen, because the change the world’s press gang wants is for Pope Francis to implement their own progressivist agenda.

Already this week in the Huffington Post, there were rumblings that Pope Francis has let gays and women down because he smiles and says nice things like “Who am I to judge?” but has not allowed women to be priests and he hasn’t changed the Church’s teachings on homosexuality. The disappointment (and with it the rage) is already beginning to build.

People of the popular press need to get their head around it: women will not be ordained as priests. In the famous airplane interview where Pope Francis said “Who am I to judge?” he also stated, “The door is closed to women’s ordination.” While he has not spoken out in harsh condemnation of homosexual actions, neither has he condoned them, nor will he.

High expectations often lead to great disappointments, and while  all Catholics are delighted with Pope Francis’s popularity, I fear the pundits in the popular press – who clearly have high hopes for radical change – will be radically disappointed. Pope Francis shows Christ’s compassion for the poor and marginalized, but as he has asserted, he is a “faithful son of the Church,” which means that while he may approach the Catholic faith with a different style,  he will not change the substance.

The title “Rolling Stone” is apt for popular culture, for popular culture rolls along swiftly – always changing with the shifting attitudes and socio-political pressures. Jesus Christ said, however, that he would build his Church not on a rolling stone, but a boulder – a solid rock that cannot be moved and against which even the powers of hell could not prevail. This Rock was his friend, Peter, whose very name means “The Rock.” And the successor of Peter is Pope Francis.

Fr. Dwight Longenecker is the author of The Romance of Religion: Fighting for Goodness, Truth and Beauty. Visit his blog, browse his books, and be in touch at dwightlongenecker.com.