Aloe Blacc Will “Lift Your Spirit” with Love 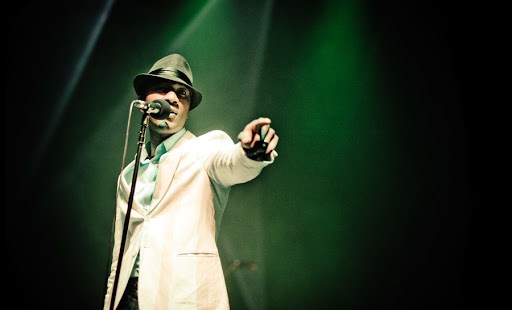 The rising star’s new album meditates on the deepest questions of human life.

With 2010’s “I Need a Dollar” – Blacc’s groundbreaking track on indie label Stones Throw records – the rapper-turned-singer left a running collaboration with producer Exile under the group Emanon (“no name” backwards). It was a fitting name – because as a 10-year veteran in hip hop, he remained somewhat under the radar.

But when those vocals broke out, everything changed. Tracks like “Dollar,” a mournful song about financial woes inspired by field recordings of chain gangs, caught the world’s attention – and to hear him tell it, it was no accident.

“Stones Throw signed me as a vocalist, not as an emcee,” he explains in an interview. “I was becoming uncomfortable with writing rhymes that ultimately didn’t say much. I was uncomfortable with the state of hip hop being largely about the expression of ego. I wondered, how could I be more crafty at writing songs in the form of a rap, that actually express more than ego, style and finesse. I figured I would educate myself to learn more about songwriting and apply that later to hip hop.”

That interior transformation proved to be a wise career move. From appearing on “Dancing with the Stars” and “The Voice” to lending his vocals to Avicii’s mega-hit “Wake Me Up,” Aloe Blacc is now a certified star – and his sterling solo debut, Lift Your Spirit, will only help his cause.

The album is a smooth cocktail of soul, jazz, and R&B with the energy of a live performance, but the personal touch of open mic night. An acoustic version of “Wake Me Up” was practically obligatory at this point, but is outshined by the lead single “The Man” (currently creeping into Billboard’s top ten), the danceable “Can You Do This,” and the title track.

Incidentally, if “The Man” sounds a lot like a send-up of Elton John’s “Your Song,” that’s because it is – in fact, Elton John shares the writing credits. And although “The Man” might sound like a return to the egotism plaguing hip hop, the video paints the lyrics in a much different light by focusing on figures like Martin Luther King Jr, Muhammed Ali, and Marvin Gaye:

But as blithe and bouncy as the album is – a fitting companion for these first weeks of spring – it also contains profound introspection. In “Ticking Bomb” he sings:

“Eyes of a Child” – the last track on the album – doubles down:

And if that weren’t enough, there’s “Here Today” – a whole track devoted to the theme of the fleetingness of life:

Blacc’s confrontation with life’s transience gives way to meditations on the purpose and the meaning of life – a sense that writer and theologian Luigi Giussani rightly termed “the religious sense.” And just as he isn’t shy about talking about death, he isn’t shy in talking about its conqueror; he looks at life’s great questions, but also sings of the great answer:

Aloe Blacc’s debut brings us the bad news: that life is nasty, brutish, and short, and that we’re all sitting on a ticking bomb. But it also brings us the good news of love, a love that “is sacred,” a harbinger of the divine life. Love is good and true – “love alone is credible” – and through it, its source lifts us up.

It may be an old theme – “God is love, and whoever remains in love remains in God and God in him” – but it never gets old.