The Few, the Hardcore, the Bizarre: Tales from the 6:30am Daily Mass Crowd 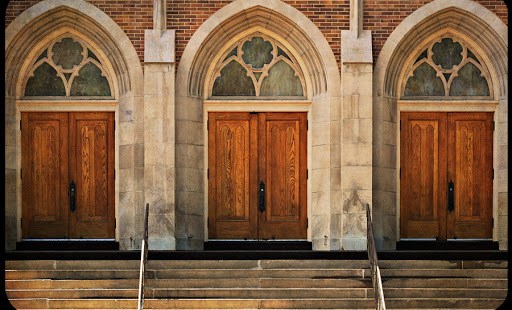 If you think your parish is boring, it might be because you’re sleeping in.

Fr. Dennis can be seen waiting at the side entrance of St. Monica‘s on California Street at 6am every morning. If he didn’t wear his priest’s collar you’d swear he was on his way to the beach to catch a wave. The guy looks like Laird Hamilton with his wispy blonde hair and year-round tan. He holds a coffee and stands there smiling from 6 to 6:30, every morning, Monday through Friday, until he celebrates Mass. The guy is a saint.

Naturally, I try to avoid him like I owe him money. Don’t know why. Maybe it’s because we’ve run out of things to talk about. Maybe it’s because he’s so decent and I feel crummy about myself. Or maybe just because it’s a little after six in the morning and I just don’t want to talk to anybody.

That’s the thing about 6:30am daily Mass. These are die hard Roman Catholics. It’s like a private club. First rule: no talking.

There’s a posted sign leading into the church that says: “Capacity 928.” But on any given morning during the week, there are less than 70 people. This means pretty much everyone has their own pew. I actually manage about seven. I sit near the church’s rear and far to the left, right next to the Third Station of the Cross where Jesus falls for the first time. The nearest person to me sits about five rows up. She’s a very old lady who holds a rosary close to her.

Most folks at 6:30am daily Mass are old. And Catholic. But not all of them. Some come to receive a blessing. Others come to get out of the cold (not that it’s ever too cold in sunny California). But there are a lot of homeless people in Santa Monica. When the doors open early in the morning, many will wander in just to nod out.

On rainy days this is a problem. At least for a World War II veteran named Willy, who’s in his 80’s. If most of these Catholics are hardcore, Willy is their general: the pre-Vatican II, Syllabus of Errors kind. He doesn’t like the sign of peace. Can’t stand liturgical dancing. Was infuriated when they moved the tabernacle off the alter. Willy especially doesn’t like it when homeless folks use our Catholic house of worship as a flophouse.

But one day, this sorry homeless bum stumbled in and crashed out in one of the back pews. He then started snoring like mad. And loud as heck, too. Old Willy put down his pieta prayer book and approached to wake him.

The guy rolled over and continued sleeping. Willy then turned to me, “Hey. You wanna help me get this guy out of here?”

I really didn’t want to. I felt sorry for the guy. “Just let him sleep,” I said.

Willy looked at me like I was on crack.

Haven’t spoken to him since.

There is one woman who’s spoken to me twice. The first time was after I had let my hair grow very long and grew a beard, too. I thought I looked pretty cool, but considering I stumbled out of bed most of the time on my way in, I probably looked like one of the homeless guys that nodded out in back. (In fact, one day when I was looking particularly ratty and praying after communion, I noticed somebody had left a dollar next to me.) She just walked up to me, grabbed my hand and said, “You look like hell, honey. Go shave and get a haircut.”

I didn’t take her advice for another month or two, but when I did she came up to me again looking like my mother when I graduated high school.

“Now that’s more like it. I knew there was a handsome face somewhere in there.”

That was it. Haven’t spoken since.

Everybody at 6:30am Mass is a story. You can see it on their faces. Only in most cases, you don’t know what that story is. You just hear things.

Like about the very sad looking man who sits near the front named Cliff. His wife of 35 years has terminal cancer I‘m told. He picks her up the Eucharist every day.