Argentine Nun Heads to Syria After Pope’s Call to Peripheries 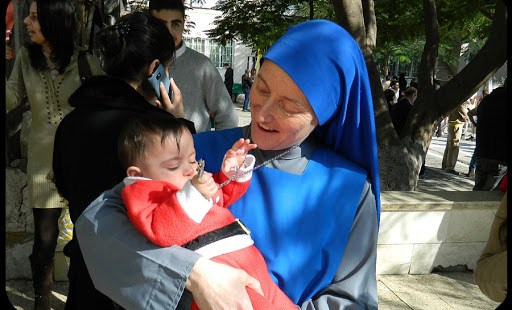 At his first General Audience after being elected, Pope Francis on March 27, 2013, called on Catholics to learn “to come out of ourselves … in order to go to meet others, to go toward the outskirts of existence, to be the first to take a step toward our brothers and our sisters, especially those who are the most distant, those who are forgotten, those who are most in need of understanding, comfort and help.”

“I’m going to Aleppo in the north of Syria,” she told Aid to the Church in Need April 28.

The war-torn country, which has seen an estimated 150,000 killed and more than 9 million fleeing their homes in the last three years, is certainly home to those forgotten, and in need of understanding, comfort and help.

The BBC’s Ian Pannell, who is the first Western broadcaster in Aleppo this year, wrote April 28 that Syrians “feel shunned by what they see as the indifference of the outside world. They are defenceless in the face of incessant attacks, caught between two sides determined to fight to the bitter end and with little hope of either respite or relief.”

Sr. Maria, an Argentine native, has chosen to go to Aleppo to help her two fellow sisters of the Institute of the Incarnate Word, who assist Bishop George Abou Khazen, the city’s apostolic vicar; she will also work in a student hostel for Christian girls.

“I asked my superiors whether I can go to Syria; they didn’t ask me. That’s the usual way with us … you are not sent by your superiors, but you yourself must ask for permission to undertake a difficult mission.”

Aleppo has been subjected to “barrel bombs” by the Syrian regime in recent months. The simple bombs are tossed from the side of helicopters, falling indiscriminately on civilians and rebel fighters alike.

According to the Violations Documentation Center, an opposition monitoring group, nearly 700 civilians have been killed by barrel bombs and warplanes in Aleppo province since Feb. 22.

The city is currently divided among districts controlled by the Syrian regime, the Free Syrian Army, and by Kurds, and fighting has escalated in the city in recent weeks.

“I trust in God and the Virgin Mary,” Sr. Maria said. “As members of a religious order we enjoy her special protection. In addition I am being accompanied by the prayers of so many people in my order. Our priests and sisters pray in particular for the Middle East. We sense this.”

In 2013, several aid workers and Christians were kidnapped in the vicinity of Aleppo. That October, seven volunteers with the Red Cross and Red Crescent were abducted. In April, two Orthodox bishops were kidnapped, and their driver killed.

A priest from Aleppo told CNA in June 2013 that he was returning to the city “because it is his duty,” and was going to take a helicopter because travel by car is too dangerous for Christians.

“I know that there are dangers,” said Sr. Maria. “Something can happen. Even the journey to Aleppo is not without hazard. You need 12 hours for the not-so-long road from Damascus to Aleppo on account of the large number of checkpoints.”

The road from Damascus to Aleppo is a mere 230 miles.