Islamic Terrorism is Leading Cause of Persecution for Christians 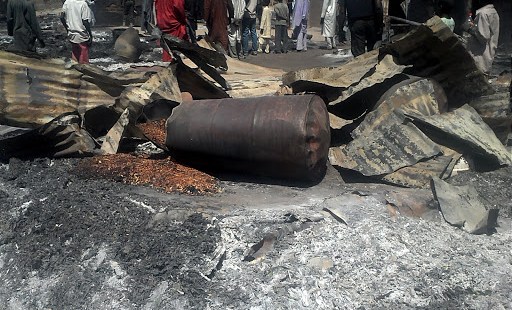 AFP PHOTO/STRINGER
NIGERIA, Konduga : Police officers stand guard in front of the burnt-out remains of homes and businesses in the village of Konduga, in northeastern Nigeria, on February 12, 2014 after a gruesome attack by Boko Haram Islamists killed 39 people. "Up to 39 people have been killed and over 70 percent of the village has been razed to the ground," Borno state Governor Kashim Shettima told reporters in the village of Konduga, blaming the February 11, 2014 late attack on the Islamist rebels.

Nigeria ranked as the top country for violence against Christians.

Islamic extremism is a leading cause of persecution of Christians, according to a report at the JNS.com news service.

JNS cites a list of the 10 countries with the most anti-Christian violence. The World Watch Top 10 Violence List, produced by the Christian human rights group Open Doors, was based on persecution incidents between November 2012 and March 2014.

Nigeria, which was ranked as the top country for violence against Christians, has been plagued by the Islamic terrorist organization Boko Haram, which recently made global headlines for its abduction of nearly 300 Christian schoolgirls.

Several Middle East countries, including Egypt and civil war-ravaged Syria, were included in the top five.

“The influx of foreign jihadist fighters and the rising influence of radical Islam within the opposition, many churches are damaged and destroy, many cases deliberately,” the report said about Syria.

According to Open Doors, the leading cause of persecution of Christians among the top 10 countries is Islamic extremism.

"Islamic extremism, tribal antagonism and organized corruption are the main persecution engines fueling violence, with Islamic extremism being the major engine in seven of the top 10 countries," Frans Veerman, director of World Watch Research for Open Doors, said in a statement.