The Great Escape from Ireland 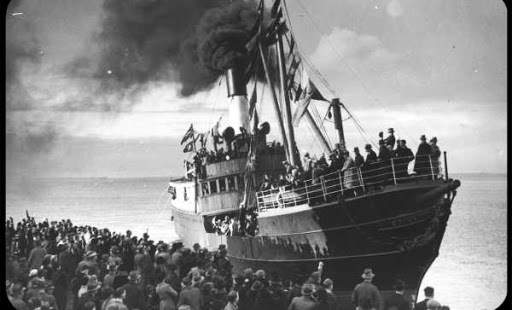 An American tale of one Catholic family’s immigration, hardships and success.


We seek a world o’er the ocean spray!


We seek a land across the sea,


Where bread is plenty and men are free,


The sails are set, the breezes swell–

Ireland in the early 1800s was a country under siege. Grim poverty and bitter conflict disfigured the lives of countless Irish Catholics; for them, life was a struggle—the “haves” against “have-nots,” Protestants against Catholics, English against Irish. Among them was a lad named Patrick Hoy.

Who Was Patrick Hoy?

Born in 1803, my Catholic Irish ancestor Patrick Hoy was a “have not.” Hence, his almost total obscurity; literally nothing is known of his parents, or place of birth. Nevertheless, today we can piece together Patrick Hoy’s experience from what is known of Irish immigrants in the 1830s-1840s, plus family history facts drawn from a ship’s manifest and U.S. Census records.

Ireland was an agricultural country of eight million, among the poorest of the poor nations. Life expectancy was short—40′s for both men and women. Many women died in childbirth. There was a high infant mortality rate. To be Irish was to know suffering and oppression.

An Irish nationalist uprising in 1798 was brutally put down by the English. Hangings were common. By 1800, Ireland became a part of England. Catholics were excluded from Parliament, with its long history of anti-Catholic hostility. Protestants owned 95% of Irish land.

As the century wore on, there were only marginal improvements. Catholic Emancipation came in 1829 through the heroic efforts of lawyer Daniel O’Connell. Nevertheless, an 1835 British Poor survey showed a whopping 75% Irish laborers without work; many were beggars.

Fleeing poverty in their occupied country, between 1815 and 1845 one million Irish left Ireland— including my family, the Hoys. What truly beggars belief, however, is the horror that came next—the Famine.

In six short years, one out of every eight Irish people starved to death. Between 1845-1851, another million Irish left or were expelled from their native soil. The statistics are astounding. By 1880, Ireland’s population had decreased 30%—a loss unequaled in modern European history.

Like the majority of his countrymen, Patrick Hoy was a laborer, toiling the soil and doing odd jobs. He worked for another, and paid rent out of meager wages. Patrick married Catharine, and raised a son, Patrick, born in 1833. Very likely his family lived in a single room windowless mud-and-stone hut.

Somehow, by age 33 Patrick had saved enough to escape with his young family to the New World. In 1836, before the famine was ever imagined, they probably went by way of Dublin to
Liverpool, England, one of the main ports to gain passage to America.

The Hoy’s Atlantic passage would have cost between 3-5 pounds; an entire year’s wages to get to America, plus what it cost to get from Dublin to Liverpool.

In Liverpool, the Hoy family would have next had to pass a medical exam certifying that they were free of contagious disease. Then, within a day or so, they boarded the Dalmatia, at Liverpool’s Waterloo dock.

The Dalmatia, a sailing ship of 358 tons, with room for about 150, had George Winsor, Jr. as Master. As this was before the famine, the ship was probably well-built and equipped, and provided a safe journey.

The Hoys’ fellow passengers in steerage on the Dalmatia hailed from Wales, Germany, Scotland, England, and Ireland. They were prepared to work in America; occupations on the Dalmatia’s manifest were listed as laborer, blacksmith, shoemaker, millwright, domestic, tailor,