When You’re Gay and You Want Your Kids Baptized 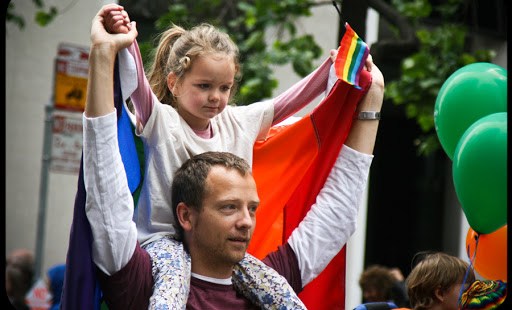 Bishops and priests are being increasingly challenged to balance pastoral sensitivities with the concern of creating public scandal as same-sex parents across the country are more often seeking to have children baptized in the Church.

The growing phenomenon will be a topic of discussion at the upcoming extraordinary Synod of Bishops on the family. The situation has already prompted reflection among several bishops and pastors. The Diocese of Madison, Wisconsin, has implemented a new policy requiring priests to consult the diocesan vicar general when they are approached by a same-sex couple seeking baptism for a child.

“As you know, there are a plethora of difficulties, challenges and considerations associated with these unnatural unions (including scandal) linked with the baptism of a child, and such considerations touch upon theology, canon law, pastoral approach, liturgical adaptation, and sacramental recording,” Msgr. James Bartylla, the Madison diocesan vicar general, wrote to priests in an internal e-mail first reported by the Wisconsin State Journal.

In one way, same-sex couples presenting children for baptism continues a decades-long trend of the Catholic Church in the United States having to baptize an increasing number of infants who are born out of wedlock. The general approach of bishops and priests has been to been to baptize the children as long as their parents did not publicly say that they disagreed with Church teaching on sexual intimacy having its proper place in the marriage of one man and one woman.

“While people may have fallen in weakness, the presumption was that they at least accepted the norm and were going to try to live by it,” Msgr. Charles Pope wrote June 29 on his blog on the Archdiocese of Washington’s website.

Pope Francis—and Pope Emeritus Pope Benedict XVI during his pontificate—have both defended the practice of baptizing children to parents whose lives do not conform to Church teachings, on the basis that children are not to blame for their parents’ situation, and that baptism can have an evangelizing effect.

However, the situation of same-sex parents wanting to baptize children presents a new set of issues. A pastor has to consider whether the couple sincerely intends to rear the child in the Catholic faith, or if the parents instead are seeking a form of legitimacy to their union.

“Sometimes, they really have no intention of raising the children in the practice of the faith. They just want to get their baby baptized, so you have to confront that,” said Father Roger Landry, a priest of the Diocese of Fall River, Massachusetts who said he has been approached on three occasions by same-sex couples seeking baptism.

Father Landry told Aleteia that he delayed baptizing one couple’s children when it became clear that the parents did not intend to rear the child in the faith, but were instead seeking baptism as a symbol of Church acceptance of their lifestyle, as well as to please their respective Catholic families. With the other couples, Father Landry said the parents agreed to carry out their obligations after he explained to them the baptismal rite and their responsibilities to teach their children the Catholic faith.

“I hope to create a conversation so that down the road they’re able to start applying a fuller understanding of Church teachings to the decisions they have made,” Father Landry said, adding that the longterm hope is a conversion of life that rarely happens after a single one-hour discussion.

The Code of Canon Law teaches that for an infant to be baptized in the Church, “there must be a founded hope that the infant will be brought up in the Catholic religion” (Canon 868). The United States Conference of Catholic Bishops, in the 2006 document “Ministry to Persons with a Homosexual Inclination: Guidelines for Pastoral Care,” said the Church does not refuse baptism to children of same-sex parents, as long as they will be reared in the faith.