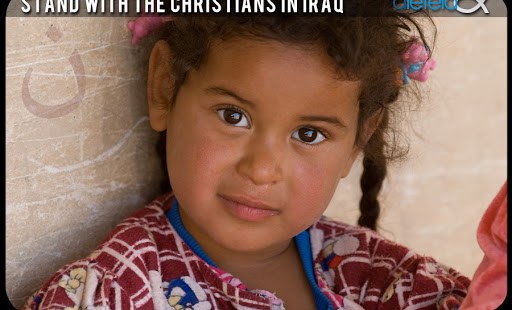 An Iraqi girl looks at the camera after receiving school supplies during a recent visit to the village of Dalish, along with U.S. Soldiers from Crazyhorse Troop, 4th Squadron, 9th Calvary Regiment, 2nd Brigade Combat Team, 1st Calvary Division, Fort Hood, Texas, on April 2, 2009, in Kirkuk, Iraq. The school supplies were donated by U.S. Soldiers families, friends, and churches.

In just over two days, an online petition to the United Nations and the Arab League in support of beleagured Christians in Iraq has garnered 53,000 signatures–more than half of its goal of 100,000.

“Today, the world is witnessing the mass persecution and genocide of the Iraqi Christian population,” says an introduction to the petition, hosted by the website CitizenGo.org. “Sadly, the international community has expressed very little concern about their fate, with few coming to their aid. The disappearance of the Christian community in Iraq presents a threat to humanity.  Who will be next?”

The online appeal, aimed at the United Nations and the Arab League, was launched Thursday by Aleteia, the worldwide network of news and information reported from a Catholic perspective. It’s one of a number of initiatives to move international bodies that might be able to intervene in a situation that is proving to be life-threatening for religious minorities in the region, particularly Christians.

“The last Christians have left Mosul, after the Islamic State of Iraq and Syria (ISIS) gave them a choice between conversion to Islam, ruinous taxation, exile, or death,” the petition states. “The Christians who chose to leave Mosul had no place to go, becoming refugees…. Now Christians in the oil-rich city of Kirkuk are worried they are next, as Islamic extremists are only a few miles away.”

Though the United Nations has denounced the persecution of Christians in Iraq, it has been too long in coming, the petition says. “After the US military pulled out of Iraq, the response to religious persecution by the international community has been totally inadequate and unacceptable,” it says. “The UN did not release statements on what was happening in Mosul until the last Christian had left. We can only wonder at this lack of urgency.”

“In the 21st century, is it necessary to wait for a crime against humanity in order for the international community to act?” the petition complains. “Can we not learn from the lessons of the past?”

Those interested in signing the petition can go to http://www.citizengo.org/en/9810-save-iraqi-christian-community.