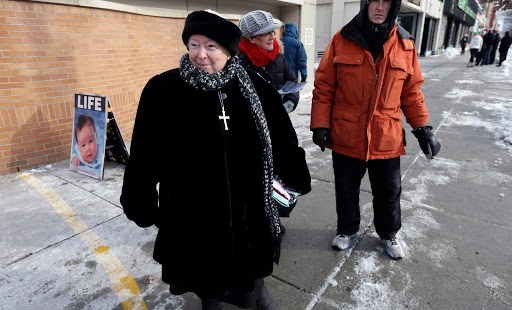 In late June, the pro-life community in Massachusetts celebrated a milestone victory when the United States Supreme Court struck down a state law that created a 35-foot "buffer zone" around abortion clinics.

Just a month later, the state Legislature, prompted by a governor and attorney general who framed the matter as a pressing public safety issue, passed a new law that allows police officers—if they feel it necessary—to order sidewalk counselors and pro-life demonstrators to keep 25 feet away from abortion clinics, or face new criminal and civil penalties.

"The bottom line is that ten feet has been shaved off the buffer zone, and a new buffer zone has been created," said James F. Driscoll, executive director of the Massachusetts Catholic Conference. Driscoll also told Aleteia that the Legislature, which sent the bill to Gov. Deval Patrick’s desk on Monday, rushed the bill through at the 11th hour without proper vetting.

The governor signed the bill Wednesday.

“I am incredibly proud to sign legislation that continues Massachusetts leadership in ensuring that women seeking to access reproductive health facilities can do so safely and without harassment, and that the employees of those facilities can arrive at work each day without fear of harm,” Patrick said in a prepared statement.

"It does show they have the ability to move things along if there is a desire by leadership and the members, which appears to be the case in this issue," Driscoll said.

Gov. Patrick and Massachusetts Attorney General Martha Coakley, a Democrat running this year for governor, said the Legislature needed to pass a new law quickly to protect abortion clinic workers and women seeking abortions from harassment, intimidation and assaults at the hands of zealous pro-life activists. In a prepared statement, State Senate President Therese Murray said the bill was a "responsible approach to addressing public safety concerns" while respecting the Supreme Court ruling.

In mid-July, Coakley told the state Joint Committee on the Judiciary that "no woman should face intimidation or threats when trying to access reproductive health care services." She also said that the U.S. Supreme Court "should not have the final word."

However, some Bay State Catholic and pro-life leaders question the public safety rationale, arguing that no sidewalk counselors or anti-abortion demonstrators have been charged with civil disobedience outside clinics in almost 20 years, well before the 35-foot buffer zone was created in a 2007 law.

"It’s a smokescreen based on lies. The whole point of the buffer zone and this law has been to marginalize and suppress the pro-life message," said Bill Cotter, president of Operation Rescue: Boston.

C.J. Doyle, executive director of the Catholic Action League of Massachusetts, said the new law selectively targets pro-life activists for the content of their speech.

"This is a punitive piece of legislation that really smacks of retaliation against the pro-life community for having the temerity of defending their constitutional rights at the Supreme Court," Doyle told Aleteia.

"If it’s applied sensibly, it’s not so bad. But we won’t know how [law enforcement] will interpret it until we see it," Fox said, adding that a sidewalk counselor could theoretically be accused of detaining someone by approaching and offering to give them literature outside an abortion clinic.

"The way it’s written, Planned Parenthood can call the police at 8 a.m., and by 8:15 p.m., the police can order everyone back for the rest of the day," Fox said.