Get Ready to Celebrate the Assumption of the Blessed Virgin Mary 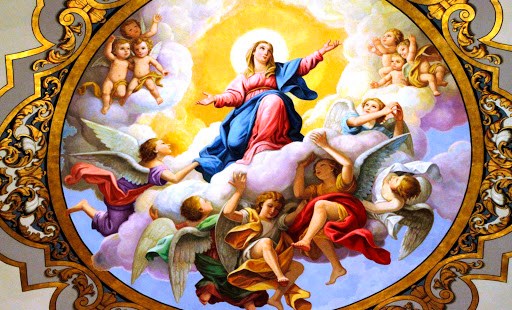 Some thoughts on why this Solemnity is so special for Catholics.

Adam and Eve ruined everything!

Such a wonderful future God had planned for us: the beauty of the Garden, a life without pain or sadness, a whole world untouched by darkness. And no death! But, no; our first parents had to go and sin, and everything was ruined. Thanks, Mom and Dad!

Now, before we get too self-righteous, let’s admit the truth: would we really have done any better? Would we have been able to resist, to hold out against the temptation, the wiles and lies of the Evil One? I think, if we’re honest, we all know the answer to that.

Still, everything was in shambles; their failure became ours in Original Sin, and God’s magnificent plan for humanity lay in ruins. We had banished ourselves from Paradise, evil was loosed upon the world, and Death – that tearing apart of body and soul, that destruction of the unity which we are – reigned.

So God, Whose will can never really be thwarted no matter what it looks like, came up with a plan – and a future – even more marvelous than the one that had come crashing down: a plan so wildly extravagant, so bold and daring, that no human imagination could have conceived it.

God could, of course, have simply, with the snap of a divine finger, wiped away the sin and the Fall and made it all new again. But that, because it would have disregarded our freedom, would also have also done away with our dignity, a dignity He takes far more seriously than we most often do.

So, to repair the breach and maintain our true freedom, the healing would have to come from among us who had caused the breach. Yet, none of us was strong enough; only God Himself could do that. So He chose to become one of us.

Now, for us, perhaps that doesn’t seem so remarkable, since we’ve lived all our lives – and the past two millennia – with the knowledge of this divine gift; but before it happened, it was, quite literally, unthinkable.

But to become truly one of us, He had to find someone, someone who was not stained and weakened by the Fall, someone to let Him in. So God searched forward and backward through all time – not difficult for Him! – and found the one person who would not do again what our First Parents did and what we ourselves would have done. He sought someone who, in humility and trust, would undo what Adam and Eve did in pride and fear.

And He found Mary, who unquestionably is the best of all of us, whom we revere as Queen and cling to as Mother; yet, she is first of all our Sister.

No one touched by Original Sin could ever have been worthy to let God in or been strong enough to reverse the No of the Garden. But Mary, alone out of all of us, once given a special gift, would have a fighting chance. So God gave her, and her alone, the remarkable gift of the Immaculate Conception – that she was preserved from the stain of Original Sin from the moment of her conception in her mother’s womb. Even with this, Mary could have still said No, could still have chosen to sin; but she was also strong enough to say Yes. And she did! And God’s plan bloomed.

I know this doesn’t seem to have much to do with the Assumption, which we celebrate today, but we’re getting there! Without the Immaculate Conception, the Assumption however would make no sense.

Because of this Yes, this fiat, this “let-it-be-done-to-me-as-you-say” of Mary’s, because she fully accepted the grace and the role God offered her, she became the Ark of the New Covenant who brought God to His people. And Death’s doom was sealed.

Death is the rendering asunder of the unity of body and soul – we are not, as so many (sometimes even Catholics) imagine, souls inside of bodies. We are both, united together.