The Two Koreas are “One Family,” Pope Says 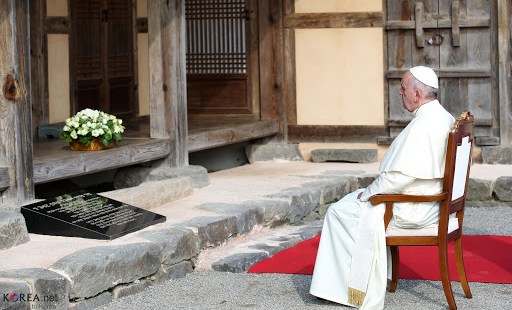 Francis calls for prayers for reunification while stressing repentance and forgiveness.

Addressing the division between North and South Korea, Pope Francis emphasized that the two are “one family,” calling for prayers of re-unification while stressing repentance and forgiveness.

“There is only one Korea, but this family is divided,” the Pope said to a large gathering of young people from across the continent.

His off-the-cuff comments came during an Aug. 15 gathering with youth of Asia at Solmoe Shrine, birthplace of the first Korean-born priest, St. Andrew Kim Taegon, who was martyred in the 1800s. The gathering was part of his Aug. 13-18 visit to South Korea, which coincides with the Sixth Asian Youth Day.

After giving prepared remarks in English, Pope Francis told the young people that he wanted to speak to them spontaneously and from the heart. Encouraged by the eager applause of those present, he set aside his text and began speaking in Italian, with the help of a translator.

The Pope encouraged those gathered at the event to pray for their “brothers and sisters in the north,” asking God to guide them to unity, and leaving aside a sense of winners and losers in order to embrace one Korean family.

He then paused and invited those gathered spend a moment praying in silence for unity of North and South Korea.
Despite the divisions, the Pontiff said, “Korea is one family” that speaks the same language.

He pointed to the Biblical account of Joseph in the book of Genesis, observing that the brothers set out to seek food during a time of famine, but instead they find a brother, whom they had earlier sold into slavery. The brothers were linked to Joseph, the Pope observed, by a common language.

“Your brothers and sisters in North Korea are speaking the same language, and that gives me hope for the future of the human family,” he said.

Pope Francis then discussed the parable of the Prodigal Son, which a group of young people had re-enacted earlier during the gathering.

He noted that the prodigal son made the difficult decision to come back and ask forgiveness for all that he had done.
The father in the parable, he added, saw the son while he was still a long way off and ran to him, embracing him before he could even apologize.

This is the celebration that God loves best of all, when we return home, the Pope said. Although we might make terrible mistakes in our lives, “God will always be waiting for us to return.”

Addressing the priests present, the Holy Father asked that they might be merciful to returning sinners, in imitation of God’s constant desire to embrace us despite our sins.