Amid Talk of Islamist Plot Against Him, Francis Prepares to Visit Albania 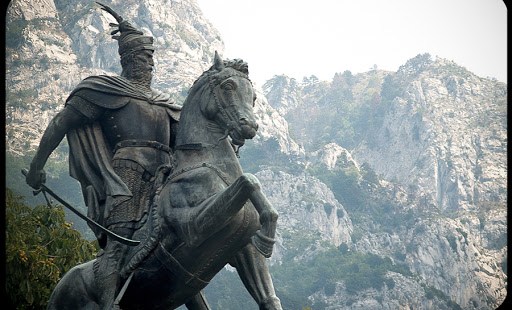 Small Balkan country has been a model of Muslim-Christian coexistence.

Concluding his weekly catechesis in St. Peter’s Square today, Pope Francis asked the faithful to accompany him in prayer as he travels to Albania this Sunday, Sept. 21.

“I decided to visit this country because it has suffered greatly as a result of a terrible atheist regime and is now realizing the peaceful co-existence of its various religious components,” the Pope said.

His request for prayer may get an extra boost as news reports suggest there may be a plot against him in the small Balkan nation.

The Vatican is not beefing up security to protect Francis during his trip, despite warnings from Habeeb Al Sadr, Iraq’s Ambassador to the Holy See, who said there are credible threats against the Pope’s life from ISIS militants, according to The Telegraph.

Fox News reported that Vatican spokesman Father Federico Lombardi said that while there is general concern, "there are no specific threats or risks that would change the Pope’s behavior or the way the trip is organized."

But Al Sadr said the Pope has made himself a target by speaking out against ISIS. On the Pope’s flight back from Korea to Rome this summer, he remarked that when a group engages in aggression against innocent civilians, as the Islamic State has done in regards to Christians, Yazidis and other religious minorities in Iraq and Syria, "it is licit to stop the unjust aggressor. I emphasize the word: ‘stop.’ I’m not saying drop bombs, make war, but stop the aggressor."

Italian news reports, citing unnamed sources, have said that Albanian law enforcement alerted Interpol with concerns that Muslim militants who trained in Iraq and Syria had returned and might pose a threat to Francis. The Italian daily Corriere della Sera said Aug. 27 that the militants are from Kosovo and are veterans of the war against Serbia.

Israeli sources also have communicated to intelligence agencies that ISIS may be targeting the Pope.

Roberto Morozzo della Rocca, one of the most authoritative experts in the history of Balkans, downplayed the fears in a recent interview with Aleteia.

“Jihadists? Albania is pro-Western, tolerant, does not have religious extremists, but there can always be an exception,” he said. “In neighboring Kosovo, it seems that somewhere around 150 young men have gone to fight alongside ISIS, and it seems that 16 of them have lost their lives. We’re talking about a small group that the government in Pristina is monitoring, and this may not be indicative of any threat to the Pope’s visit.”

There are Albanians living in Kosovo and Macedonia where, in contrast with Albania, they are almost entirely Muslim. “But one cannot equate being Muslim with being a terrorist,” said della Rocca, professor of contemporary history at the Rome Three University. “Albanian Muslims live like Westerners; they have the same ways and customs. But then, there are exceptions everywhere.”

The Catholic Church, moreover, is seen as an element of Westernization, “even if this isn’t so, since she is universal. The Church [in Albania] was reborn 20 years ago after the end of the dictatorial regime. Its structures have been rebuilt, and now nearly 10% of the population is Catholic.”

Francis’ predecessor, St. John Paul II, was the first Pope in history to visit Albania, when he made a one-day visit to the country across the Adriatic Sea in 1993. In the Catholic north of the country, he ordained four bishops, restoring the hierarchy after the Church had operated underground for decades. John Paul also spoke to a massive crowd in the main square of the capital, Tirana, and was received warmly, including by the Muslim community.

In addition, the nation takes great pride in the fact that Blessed Teresa of Calcutta is an ethnic Albanian, although she was born in Skopje, now capital of the Republic of Macedonia, at the time part of the Ottoman Empire, not Albania proper. The Pope is due to land at Mother Teresa Airport outside Tirana Sunday morning at 9, local time, and celebrate Mass in Mother Teresa Square in the heart of the capital two hours later.

Mother Teresa was present with John Paul II during his visit to the country but had also helped pave the way for the full restoration of Church life there. In the waning days of the old regime, she negotiated with the widow of communist dictator Enver Hoxha to reopen various churches and Catholic facilities that had been turned into movie theaters or warehouses and began to open centers run by her Missionaries of Charity.

Also on the packed schedule for Francis’ one-day visit: meetings with Albanian President Bujar Faik Nishani and other civil authorities, with the nation’s bishops and with leaders of the various Christian denominations and religious communities. He will also celebrate Vespers with priests, religious, seminarians, and members of lay movements and visit children at the Betania Center, along with various people from other charitable centers in Albania.