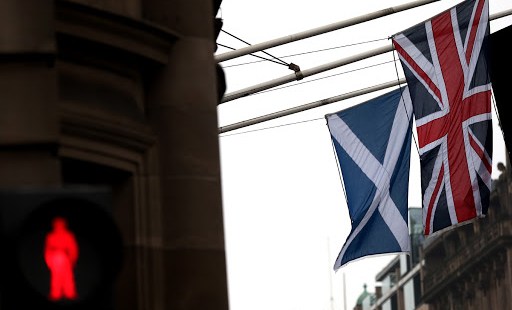 Voters in Scotland resoundingly reject option to go their own way.

EDINBURGH, Scotland (AP) — The United Kingdom will stay united. Voters in Scotland resoundingly rejected independence in a historic referendum that shook the country to its core.

But No to a break-up doesn’t mean a return to the status quo. The referendum led to promises of further powers for each of the four nations in the United Kingdom — a pledge that will change the country forever.

The vote’s results announced Friday prevented a rupture of a 307-year union with England, bringing a huge sigh of relief to Britain’s economic and political establishment, including Prime Minister David Cameron, who faced calls for his resignation if Scotland had broken away.

In Thursday’s referendum, 55 percent were against independence to 45 percent in favor. There was an unprecedented turnout of just under 85 percent.

"We have chosen unity over division," Alistair Darling, head of the No campaign, said early Friday in Glasgow. "Today is a momentous day for Scotland and the United Kingdom as a whole."

Independence leader Alex Salmond’s impassioned plea to launch a new nation fell short, with Scots choosing instead the security of remaining in union with England, Wales and Northern Ireland.

Yet the campaign tapped a wellspring of youth and energy so vibrant that even in concession, his tone was upbeat.

"This has been a triumph for the democratic process and for participation in politics," he said to cheering supporters.

In the initial euphoria after the result, the pound rose to a high of $1.6509. It has since drifted back below $1.64 as traders book profits built up this week as the pound advanced on hopes of a No result. Britain’s FTSE 100 index was also one of the best-performing stock markets in Europe, trading 0.7 percent higher on the day.

A visibly relieved Cameron promised to live up to earlier promises to give Scotland new powers on taxes, spending and welfare. He told reporters outside his Downing Street office that the new plans will be agreed upon by November, with draft legislation by January.

But then he took it further. He said change was coming to other parts of the country amid the watershed vote.

"Just as the people of Scotland will have more power over their affairs, so it follows that the people of England, Wales and Northern Ireland must have a bigger say over theirs," Cameron said. "The rights of these voters need to be respected, preserved and enhanced as well."

The vote riveted the nation. Those glued to returns included "Harry Potter" author J.K. Rowling, who had given 1 million pounds ($1.6 million) to the No campaign.

"Been up all night watching Scotland make history," she tweeted. "A huge turnout, a peaceful democratic process: we should be proud."

The No campaign won the capital city, Edinburgh, by a margin of 61 percent to 38 percent and triumphed by 59 percent to 41 percent in Aberdeen, the country’s oil center. The Yes campaign won Glasgow, Scotland’s biggest city, but it was not enough.

As dawn broke to lead-gray skies over Glasgow, the dream of independence that had seemed so tantalizingly close evaporated in the soft drizzle.

George Square, the rallying point for thousands of Yes supporters in the final days of the campaign, was littered with placards and debris of a campaign in which many had invested more than two years of their lives.

"I had never voted before or got involved with politics in any way but this time I thought my vote would count for something," said truck driver Calum Noble, 25, as his voice cracked with emotion. "I wanted a better country but it’s all been for nothing. I don’t believe we will get any of the things the London politicians promised."