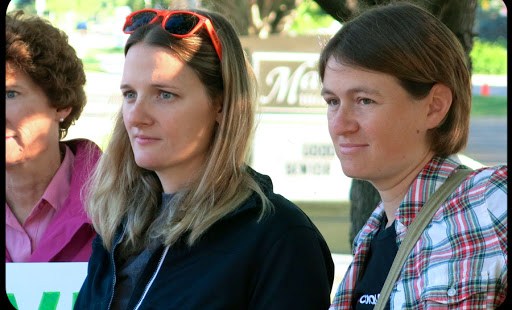 A protest over the firing of chemistry teacher and coach, Barb Webb — who is newly pregnant through "nontraditional means" (read IVF) and "married" to her lesbian partner — drew about 120 people to the sidewalks at Marian High School in the northern Detroit suburb of Bloomfield Hills.

Webb had taught at the Catholic girls’ school — run by IHM Sisters of Monroe (IHM) — for nine years before her firing in August. School administration had either not known, or had looked the other way, when she and her partner Kristen Las had a "wedding" ceremony in Windsor in 2012. But when Webb informed school administrators this summer that she was pregnant (presumably through in vitro fertilization), the school explained that she had violated the morality clause of her employment contract. She was offered the choice of being terminated or resigning with continued health insurance coverage through the school year and a non-disclosure provision.

Webb chose to be fired. The defiance evident in a post on her Facebook page shows that the morals clause to which she assented in her employment contract meant nothing.

Marian was unwilling to offer me any type of leave and of course they were not willing to grant me the same right that a half dozen other teachers are enjoying this year while starting their families. In fact, Marian’s options to me, after 9 years of dedication including league winning coaching, 4.0 averages in AP chemistry scores, PD for the school based on my personal best practices, and dozens of students and family testimonials is 1) resign or 2) we will terminate you.

Their offer of resignation included health care through May, of course they claimed it was to help their conscience after firing a pregnant woman for no other reason than for being pregnant and getting pregnant outside the Catholic way … but really I think they were interested in the gag order that came along with it.

Well, you’re damn right I wasn’t going to sign something that said I was leaving willingly, and their $4k of health insurance wasn’t enough to buy my silence.

Webb is riding on a wave of sympathy from fellow teachers, former students, parents and alumnae. Her story has made national and local headlines in the "New York Times," the "Huffington Post," "USA Today," the "New Republic" and many other periodicals.

Journalists — including homosexual columnist Andrew Sullivan, "New York Times" columnist Frank Bruni, "Detroit News" columnist Marnie Rich Keenan and others — have sided with Barb Webb, calling for compassion and demanding “rights," without recognizing the right and responsibility of a Catholic school to operate under principles inherent in Catholic moral teaching.

I recently interviewed protesters demonstrating in front of the school in support of Ms. Webb and to learn their reasons for being there. Among them was Johnnie Charlene “Char” Genther, an alumna and former campus safety officer at Marian High who was fired after publishing "Badge 3483,“ an autobiographical book recounting her experience as a Detroit police officer and lesbian. The IHM Sisters immediately offered her a full-time position in security at Marygrove College, which IHM also operated.

Genther explained: “When I was in school in the ’50s, Marian High School was a leader in the civil rights movement. It was there I learned about human dignity and human rights — just from going to school. The religious ed chaplain took a leave of absence so that he could participate in the civil rights marches. This school had a legacy of caring.”

Sharon O’Hara-Bruce, an alumna from the Class of ’64, voiced her frustration: