Will Francis Fast-Track A Canonization for Pope Pius XII? 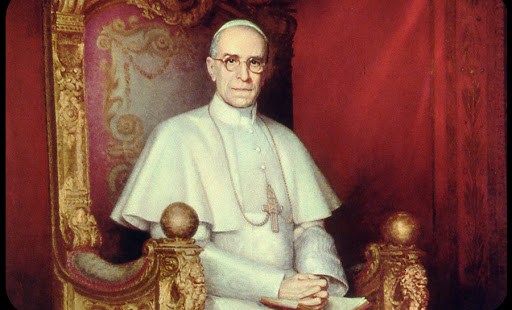 At conference, clergy and scholars commemorate the anniversary of Pius’s death

On 2 October, an international conference and a special Mass were held in Rome to commemorate the 56th anniversary of the death of Venerable Pope Pius XII, who died on 9th October 1958 at the age of 81. "Pius XII and the Second World War: Assumptions and New Archival Evidence," was hosted by the Guglielmo Marconi University and sponsored by the Pave the Way Foundation, the Knights of Columbus, and the Vicariate of the Diocese of Rome. It coincided with the opening of the Vatican Secret Archives and the Archives of Relations with States dealing with the Church’s activity during World War II.

Two days later, a special Mass in honor of the deceased pontiff was held in the underground crypt of St. Peter’s Basilica, where Pius is buried. The Mass was celebrated by Vatican Cardinal Raymond Burke, together with former secretary of state Cardinal Tarcisio Bertone, a number of priests, and over 100 of the faithful. Burke repeated the words of Pope Paul VI on the occasion of the 25th anniversary marking the start of Pius’s papacy:  "We remember a priestly life, pure, pious, austere, and laborious, often suffering…he was eminently the pope of peace." Burke concluded by asking all to continue to pray for Pius’s beatification and canonization, especially "imploring the Lord to give a sign of His will, by giving us a miracle through the intercession of Venerable Pope Pius XII, who has been called with so much esteem and affection ‘Pastor Angelicus.’"

The events revived speculation that Pope Francis might fast-track Pius XII’s path to beatification or even canonization. In July of last year, Catholic media outlets quoted an anonymous source at the Vatican’s Congregation for the Cause of Saints, who claimed that Pope Francis was considering moving Pope Pius XII from the level of "Venerable" directly to "Saint." The pope seemed to quash that rumor in May, when he told reporters that the cause for the beatification of Pius “had stalled” due to a lack of a miracle. Yet, the following month, Pope Francis commented, "They have said all sorts of things about poor Pius XII. But we need to remember that before he was seen as the great defender of the Jews. He hid many in convents in Rome and in other Italian cities, and also in the residence of Castel Gandolfo. Forty-two babies, children of Jews and other persecuted who sought refuge."

Pius XII remains a controversial figure. Opponents of the cause for beatification or sainthood claim Pius remained silent in the face of Nazi atrocities against Jews and other minorities, while supporters point to evidence that he oversaw and coordinated the rescue of at least 860,000 Jews during the war. Ronald J. Rychlak, Professor of Law at University of Mississippi, was one of the experts invited to the conference. Rychlak has published several leading books on the figure of Pius XII, including "Hitler, the War, and the Pope"; "Righteous Gentiles: How Pius XII and the Catholic Church Saved Half a Million Jews from the Nazis," and "Disinformation: Former Spy Chief Reveals Secret Strategies for Undermining Freedom, Attacking Religion, and Promoting Terrorism." He spoke to Aleteia about the conference, the historical record, and the cause for Pius.

What will Pius XII scholars focus on over the next few years? Miracles? New discoveries in the archives?

The miracles are for the Church to investigate. The scholars will (or should) be looking at the archives that are about to open. I also think that the fairly new issue of the Kremlin’s hand in promoting the “Black legend” is of significant interest. I encourage people to look at the people who produced, promoted, published, and financed "The Deputy" – the theatrical play that spread the myth of Hitler’s pope around the globe. There are numerous communist connections in all of these areas.