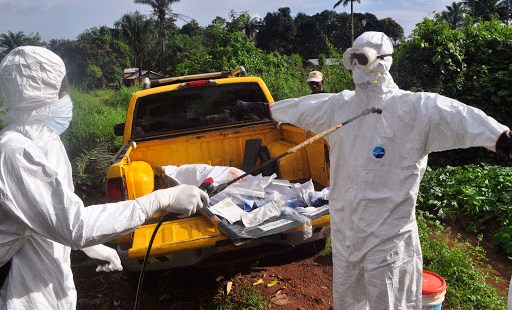 Joan Hackett is the wife of the U.S. Ambassador to the Holy See, Kenneth Hackett, and spoke with Vatican Radio about her memories of the first known outbreak of Ebola in the 1970’s.

Mrs. Hackett was working in the field of primary health care in Africa at the time and worked for a while with Dr. David Heymann, now one of the world’s leading experts on communicable diseases like Ebola and AIDS. Heyman took an active role in the first known Ebola outbreak in central Africa in 1976.

She said that for a number of reasons, she wasn’t surprised about how the Ebola virus has now “taken such a hold” and spread so quickly across a wide area.

“One important factor that I learned when I worked with Dr. David Heymann was that the natural reservoir of this virus is still unknown, and also we knew from the 1976 outbreak that this was very contagious. Put that together with an urban or densely populated area and it didn’t surprise me that it (the current Ebola epidemic) grew at such a rapid rate.”

A former Peace Corps volunteer, Hackett spent time in Cameroon, where she was dealing with tropical diseases. She described how she discovered among the local pygmy population “a pocket” of the tropical disease known as Yaws, which many thought had been eradicated in the 1950’s.

This led to her working with Heyman, who came to Cameroon to set up a successful Yaws eradication program where pygmy children were “cured almost miraculously by an antibiotic.”

Later on, she helped Heymann as he embarked on a research project to try to find the natural reservoir of the Ebola virus which involved testing both humans and animals for the presence of the virus’ antibodies. She described how they enlisted the “enthusiastic” support of the local pygmy hunters who brought into the laboratory to be tested “all kinds of animals,” including rodents, antelopes and birds.

Hackett predicted that it will take some time for the life and economies of the worst affected countries (Liberia, Sierra Leone and Guinea) to recover even when the epidemic is finally brought under control because of its wide-ranging impact upon crop planting, food markets, schooling and health services.

As she noted, any recovery hinges upon finding an effective vaccine which would transform the situation for these beleaguered countries.