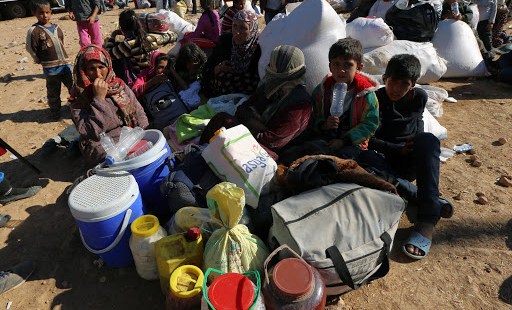 Christians regarded as foreigners. Will Francis call attention to country’s Christian past?

Since the beginning of the Iraq war in 2003, and especially since the eruption of the Syrian civil war in 2011, Turkey has become the destination—or passage way—for hundreds of thousands of refugees.

Many of these are Christians from Iraq and Syria, and many are young, single people, prepared to take great risks. In early November, a boat carrying illegal migrants from Turkey to Bulgaria capsized just after coming through the Straits of the Bosporus, on their way to Bulgaria.

The bulk of refugees end up in Istanbul, the vast metropolis capable of absorbing so many peoples. “It is difficult to know exactly how many Christians there are, since neither the UN High Commission for Refugees (UNHCR) or the Churches themselves keep any sort of head count according to religious affiliation. We welcome all those who are in need and come to us,” Bishop François Yakan, the patriarchal vicar for the Chaldeans of Turkey, told international Catholic charity Aid to the Church in Need.

Most of the refugees are dreaming of a new start in Europe or the US. But that can take a very long time. Meanwhile, in Turkey refugees have no official right to work. “Sometimes they have to wait for years, and it is terrible for families who have been scattered and dispersed to the four corners of the earth. I cannot resolve all the situations,” said the bishop, who works closely with the UN, the Turkish government and both domestic and international humanitarian associations.
The main countries offering visas are the United States, Canada and Australia. Europe has closed its doors, except in very exceptional circumstances, as happened this summer (2014) when France and Germany opened their doors to Christians and Yazidis forced out ISIS from Mosul and other cities on the Nineveh Plane.

Amer Bahnan has come here from Mosul with his family. They arrived 18 months ago. “Life had become impossible for my family in Iraq. I went to Syria first of all, then to Lebanon and finally came to Turkey.” Amer has had four heart operations.  “We have been living on the road since 2008… We no longer know where to go now. In Iraq everything was taken from us, stolen; we no longer have a house; no money, no dignity, nothing.”

Most of the refugees live in the suburbs, outside the city center, crowded into rented apartment blocks, in units shared by many families—often in unhygienic conditions. A woman tells her story: “I am a widow, with my five children. We left Duhok 16 months ago. My application has just been rejected by the American Embassy.” She now wants to try to go to Canada, where her brothers are already living. None of the family is left in Iraq.

Resident Christians do not fare much better.

There are believed to be only 100,000 Christians permanently living in Turkey, a very small fraction of the country’s total majority Sunni Muslim population of 75 million. The Christian share of the population was once much larger, but their numbers were cut down during the Armenian genocide and the mass killings of Syriac Orthodox Christians between 1895 and 1915, when several million faithful perished. Today, there are still thousands of churches and monasteries scattered across the countryside—many of them ruined and abandoned.

Christians in Turkey today are regarded as ‘foreigners’ in their own country, although there is freedom of worship. In recent years several Catholic and Protestant clergy have been murdered and in 2007 Hrant Dink, a Turkish journalist of Armenian background, was assassinated. An advocate for the country’s acknowledgement of the genocide of the Armenians, he was an activist on behalf of minority rights in Turkey. A significant portion of the Turkish public still suspects Christians of wanting to destabilize the nation.

It is in this environment that Pope Francis will make his Nov. 28-30 pastoral visit to the nation. Surely, one of his objectives is to call attention to Turkish Christian past, as witnessed to by the cities of Ephesus and Antioch, which played a prominent role in the life and mission of St. Paul. The Pontiff will also further strengthen relations with the Orthodox world in meeting with Ecumenical Patriarch Bartholomew.

This article, written by Sébastien de Courtois, was reprinted courtesy of Aid to the Church in Need.