The “Picturing Mary” Exhibit Brings A Different Kind of Woman to Washington, D.C.

“I need a ticket please,” I said. “And do you have any place where I can nurse my son”?

I had traveled with my 3-month-old from our ex-burb of Washington, D.C. to the National Museum of Women in the Arts for their new art exhibit: “Picturing Mary: Woman, Mother, Idea,” an incomparable collection of art featuring Our Lady—the first of its kind in our nation’s capital.

“We have a big bathroom on the second floor, but there’s nowhere to sit there,” replied the docent.

“Don’t you think it’s a bit ironic that this is a museum about women, but you don’t have a place for a mother to nurse her child?” Clearly, I was not their regular clientele.

“Hmmm, well,” said the docent, trying to be creative and helpful, “There is a wheelchair in the cloak closet you could use.”

Anyone familiar with the cutthroat culture of D.C., may find it hard to imagine a stronger contrast to the type of woman proposed as a success than an exhibit about Mary. Women in the nation’s capital often feel pressured to embody traits more like ruthless men: aggressive, outspoken, busy, tough-as-nails, childless, and angrily railing against the outdated mores that might work in fly-over country, but have no place in this seat of power.

The National Museum of Women in the Arts, open since 1987, subtly conveys these ideals in many of its exhibits. Its store features the works of Virginia Woolf and Frida Kahlo, a book called Feminism Unfinished, and the newly released, controversial memoir by Lena Dunham, Not that Kind of Girl, among other edgy feminist items. 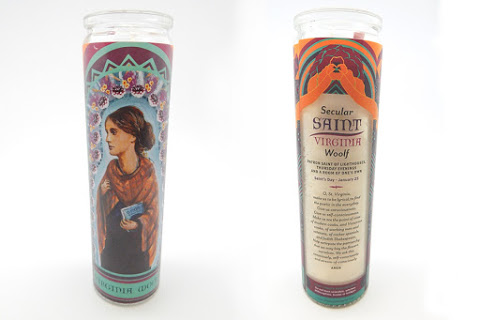 Yet, nestled in the center of this five story building in the very heart of Washington, D.C. is a hidden sanctuary offering visions of a woman who in her silence drowns out the shrill individualism the rest of the city strains for. Only Mary can find a way to penetrate what seems impenetrable.

The “Picturing Mary” exhibit is an odd juxtaposition and caused me to wonder: Does the left hand of this museum know what the right hand is doing? Mary was quiet—only reported to have said: “Do whatever he tells you” (John 2: 5). Nothing more, other than her conversation with Gabriel in which she humbly submitted to the incomprehensible simply because it was God’s will. She was receptive. She never sacrificed family for career. She pondered things in her heart. And she never played politics.

The Mary exhibit, running from December 5 to April 12, 2015, includes 68 Marian-themed pieces spanning the sixth to the 18th century. Largely Renaissance and baroque, the collection includes contributions from the Vatican Museums, the Musée du Louvre in Paris, and the Galleria degli Uffizi in Florence, Italy.

The most striking and well-known pieces in the exhibit are those by Botticelli, Caravaggio, Gentileschi, Michelangelo and Sassoferrato, elegantly pulled together by curator, Msgr. Timothy Verdon, director of the cathedral museum in Florence (Museo dell’Opera di Santa Maria del Fiore). 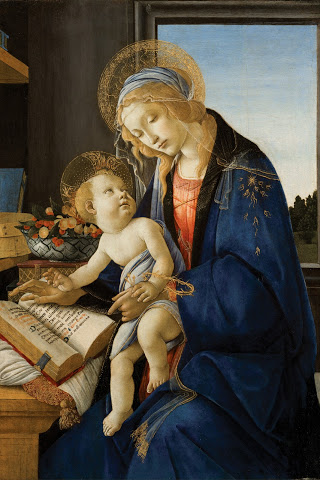 The works of art are grouped together into six general themes: Madonna and Child, Woman and Mother, Mother of the Crucified, Mary’s Singular Life, Mary as Idea, and Mary in the Life of Believers. Her humanity, goodness, and beauty come through in this exhibit, particularly in the tender works of a mother caring for her son. The suffering Mary endured throughout Christ’s crucifixion is not whitewashed, but given a central place physically within the exhibit.

In addition to paintings, there are reliefs, sculptures, Limoges on copper, a triptych made of black and white enamel, and priestly vestments. A marble and majolica pediment features Mary tickling the face of a smiling Christ child originally made for the bell tower of the cathedral, “il Duomo,” in Florence.

The billboard sized signs on the outside of the museum feature the flawless face of Botticelli’s Mary, with the caption: “Meet Mary.” Hopefully, in addition to those who already love her, many other woman and men will find Mary’s quiet, humble approach something to embrace. The museum’s exhibit certainly provides plenty to contemplate.

Can’t make the trip to Washington? The museum has available a beautiful exhibit book and a DVD

Carrie Gress has a doctorate in philosophy from the Catholic University of America and was the Rome Bureau Chief of Zenit’s English Edition. She is the author of two forthcoming books: Nudging Conversions (Beacon Press) and St. John Paul II’s Kraków: A Historical and Spiritual Guide, with George Weigel and photographer Stephen Weigel (Image Books). A mother of four, she and her family live in Virginia.