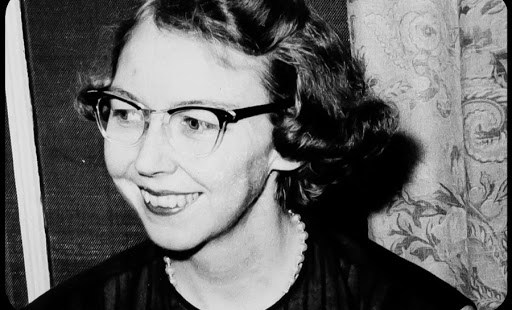 Sometime when you are going to Emory, stop by here and pay me a visit,” Flannery O’Connor told Alfred Corn in a letter in 1962. “I would like to fit your face to your search.”

She was a novelist, age thirty-seven, who lived with her mother and a flock of peafowl on a farm south of Atlanta. He was an Emory University freshman who heard her speak on campus and then wrote her a letter about his struggle to maintain his Christian faith. She wrote back, and he wrote back, and she wrote twice more. In college, she told him, “you are bombarded with new ideas, or rather pieces of ideas.” You feel “an activation of the intellectual life which is . . . running ahead of your lived experience.” She went on: “After a year of this, you are beginning to think you cannot believe. You are just beginning to realize how difficult it is to have faith and the measure of a commitment to it.

She recognized his search because she had gone through such a search in her own student days. As Mary F. O’Connor, the saddle-shoed editor of the yearbook at the state women’s college in Milledgeville, she had found herself in the predicament akin to his: that of a bright student, raised religious, who suddenly had as many questions as answers. Then, at the Iowa Writers Workshop, she introduced herself as Flannery O’Connor, inventing herself as a writer; and the questions of faith weighed on her as she tried to figure how to reconcile her Catholic piety with the strictures of literary modernism and the nasty characters, violent episodes, spicy idiom, and low jokes she was drawn to write about.

That is where we find her in the notebook of prayers that she assembled in 1946 and 1947, age twenty, twenty-one, and twenty-two. She is full of faith, but the complexities of the religious point of view are running up against her literary ambitions, on the one hand, and her sense of her own limitations on the other. The Prayer Journal is an early work by a writer whom it has been unusually hard to see as a “young writer.” More than her other early work, it fits her face to her search.

Why is it that O’Connor — who, alas, never got old — seems to us never to have been young? The reasons are many, beginning with the formal and androgyne name she adopted at Iowa. Although she insisted that any writer who has survived childhood has enough material to last him the rest of his days, in her fiction her own early life is occluded. Her practice of setting her work in the oldest parts of the Old South — boardinghouse, dairy farm, haybarn, shotgun shack — makes her seem a contemporary of Faulkner, not Mailer. The lupus that struck her at age twenty-five ravaged her looks until she resembled the figure she dubbed the Last Librarian, a spinsterly know-it-all in cat’s-eye glasses. Her death at age thirty-nine in 1964 turned the stories she wrote at age thirty-seven and thirty-eight into “late work,” and reverent exegetes such as Sally Fitzgerald exaggerated the effect, presenting her unexpected death as the fulfillment of an “active destiny.”

Mostly she seems ageless because of the breathtaking confidence of her remarks on matters of faith and art. To Corn, for example, she wrote:

One of the effects of modern liberal Protestantism has been gradually to turn religion into poetry and therapy, to make the truth vaguer and vaguer and more and more relative, to banish intellectual distinctions, to depend on feeling instead of thought, and gradually to come to believe that God has no real power, that he cannot communicate with us, cannot reveal himself to us, indeed has not done so, and that religion is our own sweet invention. This seems to be about where you find yourself now.