Madonna’s Demons, the President’s PSA and Other Grammy Oddities 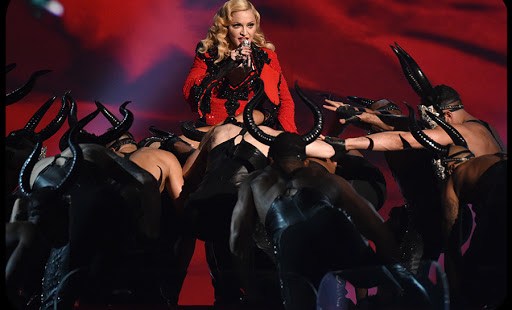 A strangely discordant evening all around

Smack in the middle of the Grammy Awards Sunday night, viewers were treated to a public service announcement from the President of the United States. The topic — violence against women, rape and domestic abuse — is serious and important, but the setting was rich with irony. Here’s an excerpt from the President’s message:

Tonight, we celebrate artists whose music message helps shape our culture and together, we can change our culture for the better by ending violence against women and girls. Right now, nearly one in five women in America has been a victim of rape or attempted rape. And more than one in four women has experienced some form of domestic violence. It’s not okay. And it has to stop. Artists have a unique power to change minds and attitudes and get us thinking and talking about what matters. And all of us, in our own lives, have the power to set an example.

For Grammy Award nominees Chris Brown and R. Kelly, the message was not likely to have made them squirm in their seats. Jessica Goldstein had this to say about the Grammys’ going easy on Brown:

Given the opportunity to “send a message,” as the Grammys are so eager and desperate to do, the Grammys went with this: should a person leave his girlfriend in such a bloodied, battered state that she needs to be hospitalized, and should he be arrested and charged with felony assault and ultimately be sentenced to five years probation and 180 hours of community service after pleading guilty to that felony assault charge, and should he go on to demonstrate approximately zero remorse, he should definitely be forgiven and come back to the Grammys before his probation is even up.

And R. Kelly? If you don’t know his history, Ms. Goldstein sums it up nicely:

None of the Grammys powers-that-be has commented on the fact that R. Kelly, an alleged serial rapist of underage girls, has been nominated for 25 Grammys, three of which he’s won. His wins came in 1998, two years before Jim DeRogatis’s Chicago Sun-Times story that first accused Kelly of “us[ing] his position of fame and influence as a pop superstar to meet girls as young as 15 and have sex with them.” Even after news of Kelly’s predatory behavior became public, the Grammys saw fit to recognize him with fourteen more nominations, including this year’s nod for “It’s Your World” with Jennifer Hudson.

So much for treating unrepentant serial abusers and rapists as pariahs.

But that’s not the end of the irony. The President also noted that “Artists have a unique power to change minds and attitudes and get us thinking and talking about what matters. And all of us, in our own lives, have the power to set an example.”

If AC/DC and Madonna wanted to get us thinking and talking about anything that matters, they failed utterly.

One can only hope that the aging AC/DC was powerless to “change minds and attitudes” in the TV-viewing audience with their rendition of “Highway to Hell.” The live Grammy audience, including Katy Perry, went along with AC/DC’s silly gimmick like so many sheep — wearing light-up devil horns during the performance.

Perhaps they needed audience participation (and teleprompters) to do their best without drummer Phil Rudd. He was indisposed (meaning not allowed to leave New Zealand pending his upcoming trial on charges of threatening to kill a man and his daughter and possession of methamphetamines). He’d also been charged with an attempt to hire a hitman, but prosecutors felt the evidence was not strong enough to proceed on that count.

For all that, Madonna, 56, gets the prize for the most tasteless performances of the night on the red carpet and on stage. She arrived at the Grammy’s in a black leather get-up on a “matador” theme. The bodice was designed to act like a pushup-bra, exposing more 56-year-old flesh than anyone would care to see. Leather boots ended above her knees, exposing fishnet stockings and her entire butt when she flipped up the back of her “dress” in a saucy gesture. What a class act.