What Is It About the Virgin Mary that Enrages Feminists? 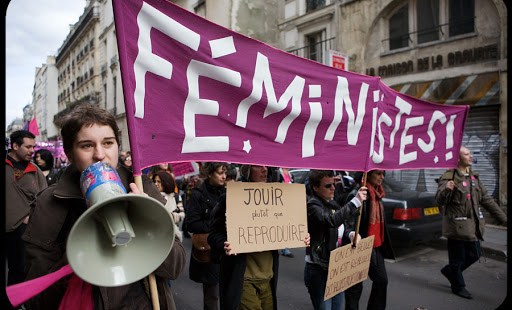 And whose model of womanhood leads to happiness

I ended my last column by saying, “The shining and lived answer to those questions is found in Mary, Virgin and Mother.” Let’s look at that suggestion — one that would have been unexceptional a few generations ago, but is now problematic even within some Catholic circles, and typically scorned by large segments of secular feminism. Surprisingly, there are startling parallels between the Catholic diffidence regarding Mary and the outright rejection of her by some secular feminists.

The sticking point is Mary’s traditional titles as Virgin and Mother. Virginity as a term of praise, and even an ideal, has fallen upon hard times, even in some environments self-identified as “Catholic.” Why? Let’s be frank — in the contemporary Western world, we’ve all been immersed for 50+ years in the culture of “Everybody’s doing it!” (Here, of course, “it” refers to sex apart from marriage.) Saying that Mary-as-Virgin is a key to restoring the happiness God intends for women would be a hard sell in these circles. But it doesn’t have to be that way.

Some years ago, Sarah Hinlicky wrote a delightful essay proving that she had wisdom beyond her years: “Subversive Virginity.” (She later penned a fine essay on masculine virginity.) There she summarizes the view of secular feminism on sexuality, a view that has taken hold within some self-identified Catholic individuals and communities:

According to received feminist wisdom, sexuality is to be understood through the twin concepts of power and choice. It’s not a matter of anything so banally biological as producing children, or even the more elevated notion of creating intimacy and trust. Sometimes it seems like sex isn’t even supposed to be fun. The purpose of female sexuality is to assert power over hapless men, for control, revenge, self-centered pleasure, or forcing a commitment. A woman who declines to express herself in sexual activity, then, has fallen prey to a male-dominated society that wishes to prevent women from becoming powerful. By contrast, it is said, a woman who does become sexually active discovers her power over men and exercises it, supposedly to her personal enhancement.

In other words, female sexual expression is an act of personal and political power. Virginity, on this view, is a witless and feckless failure to exercise that power. Hinlicky’s response to that assertion is incisive:

[N]o one can claim control over a virgin. Virginity is not a matter of asserting power in order to manipulate. It is a refusal to exploit or be exploited. That is real, and responsible, power. … There is an undeniable appeal in virginity, something that eludes the resentful feminist’s contemptuous label of ‘prude.’ A virgin woman is an unattainable object of desire, and it is precisely her unattainability that increases her desirability. Feminism has told a lie in defense of its own promiscuity, namely, that there is no sexual power to be found in virginity. On the contrary, virgin sexuality has extraordinary and unusual power. There’s no second-guessing a virgin’s motives: her strength comes from a source beyond her transitory whims. It is sexuality dedicated to hope, to the future, to marital love, to children, and to God. Her virginity is, at the same time, a statement of her mature independence from men. It allows a woman to become a whole person in her own right, without needing a man either to revolt against or to complete what she lacks. It is very simple, really: no matter how wonderful, charming, handsome, intelligent, thoughtful, rich, or persuasive he is, he simply cannot have her. A virgin is perfectly unpossessable.

Hinlicky makes clear that the virgin is nobody’s fool, nobody’s toy and nobody’s possession. She is secure in her identity and integrity. Above all, she has the genuine power and inarguable freedom to declare “Yes” or “No.” Mary-as-Virgin is the exemplar of that freedom. Her “Yes” to the divine invitation, her “Fiat!” to the call of the Holy Spirit is the highest and most vivid illustration of the freedom of the virgin. Hers is a free, powerful and uniquely-sought-after “Yes.”

That freedom to answer God’s call is oh so much greater than the thoughtless jumping onto the bandwagon of “But everybody’s doing it!” The “Yes” spoken to the angel Gabriel by the Virgin Mary is the model of the interior freedom necessary to give a full and genuine “Yes” to Divine Providence. The “Yes” to God that can flow only from such an interior freedom, a hallmark of the self-possessed Virgin, is an essential element in the restoration to women of the happiness God intends for them. Mary’s Virginal freedom, her independence from whim and trend, enabled her to become uniquely fruitful as the Mother.