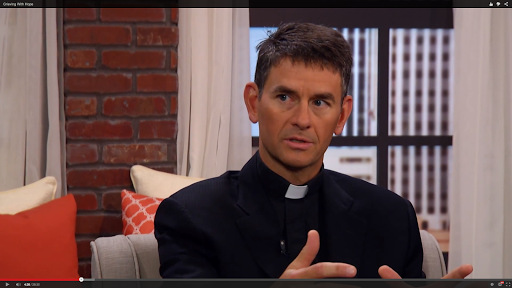 See how weighty miracles can be

My first memory is of the crucifix in my boyhood parish, Holy Name in Birmingham, Michigan. I do not know how old I was, but I knew Jesus had died for me and my whole life was suppose to be a response to this. This is certainly not a typical first memory but my family was anything but typical.  My father, John, was the Chief Executive Officer and Chairman of the Board for the Chrysler Corporation, and also a devout Catholic.

My father proved that religion was not just a crutch for the weak. Every night he was on his knees before he went to bed, and even during his frequent travels he went to daily Mass.  My mother, Thelma, was initially a Methodist, but she accompanied us to Mass long before her eventual conversion to the Catholic faith.

I was the youngest of five children and my very existence occurred against the advice of my mother’s doctor, because of her painful and crippling back condition.  My mom later told me that I was a gift to her and my father, and in turn, they gave me back to God.
During my childhood,  my prayers centered around my mother’s bad back. Endless treatments failed to alleviate her constant pain.  When I was thirteen, one of my sisters called our mother to tell her she had just come from a charismatic prayer meeting and someone had sensed that God wanted to cure someone with a bad back.  My sister was convinced it would be our mother.

Within a month, mom was playing tennis — completely healed — although there was no medical reason for the pain to be gone. Two years later, she formally converted to the Catholic faith.
Growing up in this home of prayer and miracles gave me a strong anchor.  Yet, ironically, as a teenager, I began to hide my faith. I never stopped praying, but I began to live a life as one leading to hell. I no longer went to confession and by the time I attended college at University of Michigan in Ann Arbor, my attendance at Mass was sporadic. It wasn’t enjoyable to hear the Gospel when I was not living a holy life.
Not until my junior year in college, in 1986, did my life change. I began connecting with a group of young men for basketball games who were part of an ecumenical Christian brotherhood outreach group.  I saw men my own age who were normal guys but really knew God and were not afraid to talk about it. I began to examine my life and went through a conversion.  At this time, I  broke off a serious romantic attachment, leaving me free to concentrate on Christian outreach to university students.
Upon graduation, armed with a degree in English and communications, I interviewed for jobs in the automotive industry.   It soon became clear to me that this was not the life God intended for me. So while trying to find his niche in the world, I accepted a job baking bread. With great trepidation, I drove home to tell my father of my plans to bake bread. I thought my dad would be disappointed. Instead, he told me he would be thrilled with whatever I chose to do in life
even if I wanted to be a priest. I assured him that would never happen.
Driving back to Ann Arbor that day, tears streamed down my face as I felt my life was moving beyond my own control. I wanted to follow Jesus, but as yet, I was unclear where that led. What I was suddenly clear on, however, was that following Jesus was not romantic; that the cross is heavy.  I realized I was not the one in control.
As I cried, the words to a Christian song, "God’s Own Fool"  played on my car stereo.  "…So come lose your life for a carpenter’s son, for a madman who died for a dream.  And you’ll have the faith His first followers had and you’ll feel the weight of the beam."