Darnilo in the DR: Homeless, In Pain, and Yet Grateful 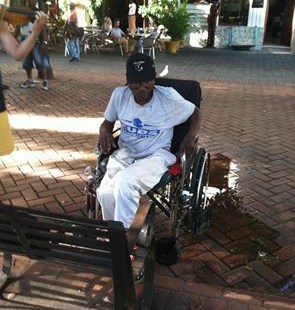 An encounter with the mystery of suffering

Having worked with the homeless in the Dominican Republic for over six months, I have interacted with people from all walks of life. A friend and I are trying to establish a Catholic Worker house in the capital, Santo Domingo. Yesterday, I described how we worked with one woman, who was not only homeless but was also lacking the trust needed to get her to open up so we could help her.

I have heard several troubling testimonies working with the homeless, be it drug addicts, whose predicament is more or less self-induced, children living in the street because one or both parents have died, or elderly folks with no living family.  Although all of the people I have met have touched my heart in a profound way, there is one person in particular, a 68-year-old man in a wheelchair named Darnilo, who, without even knowing it, has taught me so much and changed my life for the better.

I first met Darnilo on a Monday afternoon nearly six months ago.  My good friend and fellow Catholic Worker, Felix Cepeda, and I were just leaving the cathedral established by Christopher Columbus when I noticed a very frail old man sitting in a wheelchair watching a group of doves hovering around him in search of bread crumbs.  I turned to Felix and asked, “What do you think?”

“He looks homeless to me. Look at his shoes, that is usually a good indicator,” he replied.

As I approached this old man, I was under the impression that I would be ready to talk with him, offer him a sandwich, and perhaps play a few violin songs for him.  But alas, upon seeing him up close, I quickly realized I was wrong.  The first thing I noticed, aside from how thin and frail he was, was the large dent on the left side of his forehead.  He wore crooked glasses, an old grey shirt that appeared to be saturated in drool, black dress pants that were far too baggy for his slim frame, and, as Felix pointed out, a very old pair of shoes.

Once I was able to retrieve my throat from the depths of my stomach, I said to him, “Good afternoon sir. Would you like a sandwich?”

He picked his head up quickly, looking around to see who spoke, and then shouted, “I am sorry, my son, I cannot hear very well. You are going to have to speak up.”

I repeated the offer with much more bravado and added that my name was David Janicki and I was a Catholic mission worker.

That did not generate a reaction. He simply extended his right hand slowly—it was shaking uncontrollably—and shouted, “Give me one if you’d like!”

After giving him the sandwich I sat down next to him and tried in vain to start a conversation.  Understanding him was very difficult.  The only information I managed to uncover was that his name was Darnilo.  I said to him, “Well Darnilo, it was a pleasure meeting you.  I hope you have a wonderful day and know that God loves you.”

At that moment he lifted his head and looked deep into my eyes and then shot me a grin, which, based on the effort needed to produce the gesture, I could tell was very painful for him, and then shouted, “Amen!”

I wish I could describe the feeling that came over me.  I knew very little about Darnilo then, but I knew with certainty that God had made a permanent home in his heart.

Over the next few weeks I began to spend more and more time with Darnilo.  I learned that he was 68 and that his wife had passed away nearly 13 years ago.  That same year, he was in a terrible car accident, which left him unable to walk and with severe nerve damage. Due to the enormous medical bills following the accident, he lost everything he owned and has been living alone on the street ever since.

He told me that from the moment he wakes up to the moment he falls asleep he is in constant pain.  Nearly every new detail about his life saddened me and caused my stomach to turn.  I asked him what a typical day for him looks like and he responded that he spends all day sitting in the park outside of the cathedral. Then, around 5pm he wheels himself up to the corner roughly two blocks away, where he sleeps.

Darnilo is a very prideful man. Unlike many of the homeless living around the Colonial Zone, he does not beg or ask for money or food, although he is extremely grateful when we give him anything.

In spite of this, when Felix and I go and visit him each morning, I ask him, “Darnilo, how are you doing?” and he always replies with a smile on his face: “I’m alive, thanks be to God!  Praise His name!”

Initially, I could not comprehend how someone who is in a permanent state of suffering through no fault of his own, could have such a profound faith and love for God.  I have learned, though, thanks to Darnilo, what a wonderful special grace is it to suffer.  Through suffering, the soul becomes like the Savior and is able to understand more fully the love Christ has for us.  It is a very special grace and God only grants it to souls that He knows are strong enough to bear it.  I shared this revelation with Darnilo and added that there is a very special place reserved for him at the banquet of the Lord.  He looked at me, smiled and said, “Amen my son, Amen!”

David Janicki is a Washington State native and graduate of the University of Dallas volunteering in the Dominican Republic with the Catholic Worker movement.