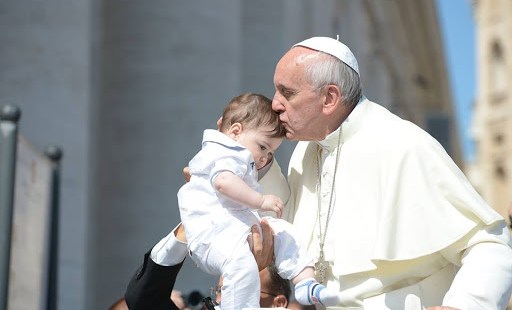 Will the mainstream media take notice?

VATICAN CITY — Last Saturday, in an address to the Italian Science and Life Association, the Holy Father listed the “scourge of abortion” as the number one contemporary attack on human life. It is just one of several pro-life statements Pope Francis has made in recent weeks, reinforcing Church teaching in support of the unborn, the elderly, marriage and the family ahead of the October Synod on the Family. Here below we publish 5 of the Pope’s most recent pro-life statements.

1. Saturday, May 30, 2015 address to the Italian Science and Life Association

“The degree of progress of a civilization is measured by its ability to protect life, especially in its most vulnerable stages, rather than by the spread of technological tools. When we speak of man, let us never forget all the attacks on the sanctity of human life. The scourge of abortion is an attack on life. Allowing our brothers on the boats in the Strait of Sicily is an attack on life. Deaths caused at work because the minimal safety conditions are not respected is an attack on life. Malnutrition is an attack on life. Terrorism, war, violence are attacks on life; but euthanasia is as well. To love life means always talking care of the other, wanting his own good, and cultivating respect for his his transcendent dignity.”

2. May 26, 2015 interview with an Argentinian journalist from the newspaper La Voz del Pueblo:

Pope Francis said he finds it “curious” that there are countries with strict child-protection laws that penalize parents for slapping their kids, yet allow them to kill those children before they are born.

“It is important that the positive aspects of the family that are lived in Africa should be expressed and understood. In particular, the African family is welcoming toward life, it respects and pays attention to elderly persons.

This heritage must therefore be preserved and must serve as an example and encouragement for others. The sacrament of marriage is a pastoral reality that is thoroughly accommodated in your country, although obstacles of a cultural and legal nature still exist, preventing some couples from realizing their desire to found their conjugal life on faith in Christ. I encourage you to persevere in your efforts to support families in their difficulties, above all through education and social work, and to prepare couples for the demanding but magnificent duties of Christian marriage.

Togo is not spared from the ideological and media attacks that today are spread all over, proposing models of union and family that are incompatible with the Christian faith.”

4. May 10, 2015 address to participants in the Rome March for Life following the recitation of the Regina Caeli:

“I greet all those who have taken part in the initiative for life conducted this morning in Rome: it is important to work together to defend and promote life.”

5. May 9, 2015 address to the bishops of Mozambique, who were in Rome on their ad limina visit:

Among the functions of the episcopal conference […] I encourage a decisive development of good relations with the government, not of dependence, but of healthy collaboration […], with particular attention to the laws that are approved in parliament. Beloved bishops, spare no effort in supporting the family and in defending life from its conception until natural death. In this regard, remember the choices proper to a disciple of Christ and the beauty of being a mother accompanied by the support of the family and of the local community. May the family always be defended as a privileged source of fraternity, respect for others, and the primary pathway of peace.