The Duggars: When the Celebrated Fall

TV personality Montel Williams took to Twitter to slam Josh, writing: “BREAKING: Josh Duggar, a world class bigot, admits sexually abusing young girls – has consistently stated that LGBT folks r danger to kids.”  He followed that tweet up with another: “Sorry, Josh Duggar is a bigot, slimebag. Whole family is, and FRC is a scam. Yup, Gay people are the danger to kids? NOPE, JOSH DUGGAR IS.” 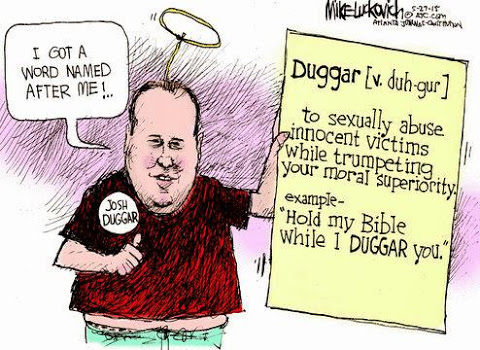 The reactions of the Duggars’ haters are no surprise.  It’s human nature to feel a smug sense of pleasure when someone we dislike gets taken down a peg, particularly when that person is in a position of power and influence.  “The bigger they come, the harder they fall” is a well-worn cliché for a reason, and no one repeats it without feeling at least a twinge of schadenfreude for its latest victim.

But according to scientific research, schadenfreude says a lot more about the people who feel it than those who trigger the feeling.  When Dutch researcher Wilco van Dijk did a study on the topic with his colleagues at Leiden University, he found that the people most likely to experience pleasure at another’s misfortune were those who felt low self-esteem.  Those people were more likely to feel threatened by the successes of those they saw as competitors, and to take joy in their failures.

"I think when you have low self-esteem, you will do almost anything to feel better, and when you’re confronted with the misfortune of others," you’ll feel schadenfreude, van Dijk told LiveScience.

But for the Christian, however natural this feeling may be, it’s one we’re called to work against.
“Rejoice not when your enemy falls, and do not let your heart be glad when he stumbles, when he meets with anything that injures him … or feel any disposition contrary to love,” reads Proverbs 24:17, “for if you do, the Lord will be angry, and may turn away his wrath from him, and pour it out on you.”

In an article for the Catholic Review, Dr. H.P. Bianchi called schadenfreude “the sin of the modern world,” and argued it is “driving much of the racism, terrorism, warfare, and inequality in the world today.”   Schadenfreude, he asserted, kills our love and empathy for our fellow man and disconnects us from one another, leading to many “atrocities and injustices.”  But to solve the problem, he wrote, will take more than simply swallowing our feelings of joy at our enemies’ failings – we must take the next step, and actively seek to show them the love of Christ.

“As Christians, we are called to more,” Bianchi wrote. “To imitate Christ, we need to do more than not delighting in other people’s suffering. We need to also seek out those who are in pain, and lighten their load, by carrying part it. I promise you that will give you true joy, and it will be far more profound and fulfilling than the delight found in schadenfreude.”

Prayer for this evening
Top 10
1
Philip Kosloski
10 Mysterious things to know about guardian angels
2
Philip Kosloski
5 Important things to notice in a Catholic church
3
Kathleen N. Hattrup
Do you know the 3 words that describe God’s style? Pope Fra...
4
John Burger
Pope’s trip to Iraq is like a pilgrimage to a Holy Land
5
Philip Kosloski
10 Things you should know about St. Joseph
6
John Burger
Nun and monk put themselves between police and protesters in Myan...
7
Philip Kosloski
Should you name your Guardian Angel?
See More
Newsletter
Get Aleteia delivered to your inbox. Subscribe here.