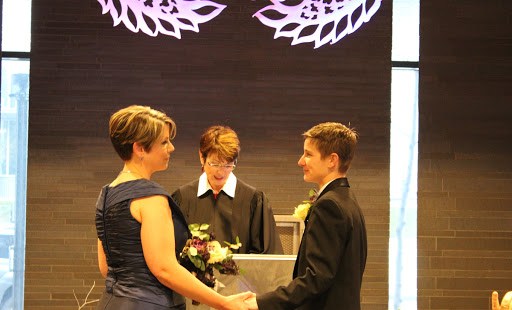 Religious beliefs would excuse JPs from performing all marriage ceremonies

Same-sex "marriage" is legal in a majority of US states, including North Carolina.

But if you are a justice of the peace in the Tar Heel State, and your religion teaches you that same-sex "marriage" is wrong, you now do not have to preside at one.

The North Carolina State House on Thursday voted to override a veto by Gov. Pat McCrory of a bill granting certain public officials the right to opt out. The state Senate voted likewise a week earlier.


The law says court officials who disclose a "sincerely held religious objection" must stop performing marriage duties for both gay and heterosexual couples for at least six months. The chief District Court judge or the county register of deeds – both elected officials – would fill in on marriages if needed….

McCrory had said he does not favor same-sex "marriage" but that no one who takes a government oath should be allowed to avoid performing duties required by that oath.

Legalization of same-sex "marriage" has given rise to such measures as North Carolina’s—and a similar one in Utah—as well as bills in other states that would protect the right of people to opt out of providing services for same-sex "marriage" celebrations, such as renting out a property for a banquet, providing floral arrangements or baking cakes.

The debate over such "religious freedom" bills could become more intense if the US Supreme Court decides in favor of same-sex "marriage" this month. A decision is expected by the end of June.