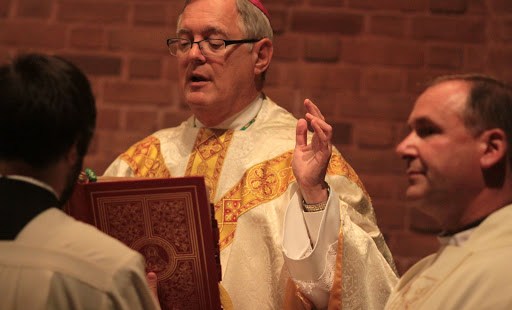 In the wake of the Supreme Court’s ruling legalizing same-sex "marriage" nationwide, Rhode Island Bishop Thomas Tobin said the country needs "many more" conscientious objectors, such as the government official in Texas who refuses to issue marriage licenses to gay couples.

"A county clerk in Hood, Texas, isn’t going to issue marriage licenses to same sex couples because, she said, she has rights too," Bishop Tobin, who heads the Providence Diocese, said in a Facebook post. “’I will not be issuing same sex marriage licenses due to my religious convictions,’ Katie Lang wrote. Lang said that the Constitution guarantees her freedom of religion too."

"Congratulations to Ms. Lang for her courageous stand! We need many more conscientious objectors—public officials, private businesses, advertisers, religious leaders, and family members—people of courage who will abide by their conscience, protect their religious rights, and not support or enable the furtherance of this moral aberration—so called, ‘same-sex marriage,’” the bishop concluded.

Bishop Tobin reminded readers that the bishops of the United States have said that the Supreme Court decision allowing same-sex "marriage” is “a tragic error that harms the common good.”

"Catholics, and other citizens of goodwill, should oppose this misdirected innovation and steadfastly proclaim the unchanging truth about marriage as we have received it from God," Bishop Tobin said.

After initial reports that Lang had opted out of the new ruling, she issued a statement clarifying that her decision applied solely to herself but that other staff in her office would be able to issue licenses to same-sex couples.

“I am grateful that the First Amendment continues to protect the sincerely held religious beliefs of public servants like me," she said. "That has not changed since last Friday.”

Texas Attorney General Ken Paxton issued an opinion after the ruling in which he said that “County clerks and their employees retain religious freedoms that may allow accommodation of their religious objections to issuing same-sex marriage licenses." He called the Obergefell decision a "lawless ruling" and said state workers coule cite their religious objections in denying marriage licenses.

But he warned that any clerk, justice of the peace or other administrator who declines to issue a license to a same-sex couple could face litigation or a fine.

“Numerous lawyers" stand ready to defend, free of charge, any public official refusing to grant one,” he said.