The Lord’s Prayer During Mass: Should We Hold Hands? Or Raise Them in the Air? 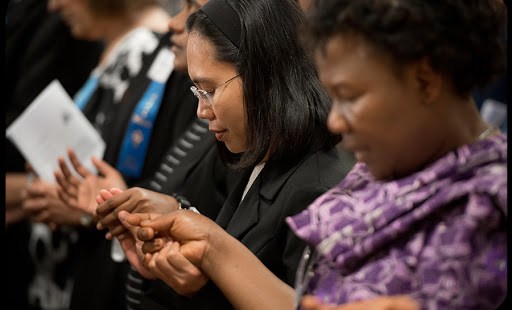 These practices are not explicitly prohibited in the missal, but come from a Protestant tradition

The practice of holding hands while praying the Our Father comes from the Protestant world. The reason is that Protestants do not have the Real Presence of Christ; that is to say, they do not have real and valid sacramental Communion that joins them among themselves and with God. Therefore, they turn to the gesture of holding hands as a moment of communion in community prayer.

During the Mass, we have two important moments: the Consecration and Communion. There – during the Mass – is where we find our unity; that is where we join ourselves to Christ and in Christ, through the common priesthood of the faithful. Holding hands is obviously a distraction from that. We as Catholics are united by receiving Holy Communion, not by holding hands.

There is nothing in the General Instruction of the Roman Missal that indicates that we should hold hands. During the Mass, every gesture is regulated by the Church and its rubrics.

This is why there are particular moments during the Mass when we kneel, parts when we stand, parts where we sit, etc. – and nowhere in the rubrics does it say that we have to hold hands when we pray the Our Father.

Therefore, we should avoid this practice during the celebration of Mass. Now, if someone wants to do it, let them do it (as an exception) with someone they know very well, without forcing anyone to do it, without making anyone uncomfortable and without trying to convert this practice into a liturgical norm for everyone.

We have to remember that not everyone wants to hold the hand of the person next to them, and trying to impose it on them creates a moment of discomfort to the detriment of prayer, piety and recollection.

(Community prayer outside of Mass is a totally different question; when praying outside of Mass, there is no liturgical reason why not to hold someone’s hand, since it can be a very moving and symbolic gesture.)

This, like other attitudes, is nothing but an exaltation of feelings. Being in communion with someone doesn’t depend so much on holding their hand when praying the Our Father, as on having gone to Confession, being in a state of grace, and, above all, being prepared for the Eucharist.

If the gesture of holding hands were necessary, important or appropriate for the whole Church, the bishops or episcopal conferences would already have sent a petition to Rome long ago asking to institute this practice. They haven’t done so, nor do I think they ever will.

Another thing that you see a lot when praying the Lord’s Prayer is that people raise their hands like the priest does, which isn’t correct either. During Mass, lay people should not make gestures that are reserved for the priest, just as they should not say the words or prayers of the priest, confusing common priesthood with ministerial sacrifice.

Only priests extend their hands, and it is best that the faithful stay as they are or join their own hands in prayer, because internal faith, which God sees, is what matters.

The purpose of the priest’s external gestures during Holy Mass – above all – is that the faithful see that the priest is the person designated to intercede for them.

Extending one’s arms in prayer was already a custom in the early Church, but in the context of a prayer circle, or private prayer, or some other non-liturgical event, not during Mass.

Both holding someone’s hand and lifting up one’s hands when praying the Lord’s Prayer are, in the case of the faithful, non-liturgical practices; even though they are not explicitly prohibited in the missal, they are not appropriate for a healthy Liturgy.

The faithful should not repeat in their words or actions what the priest does or says, since the priest’s role is to preside the liturgical assembly.

[Editor’s Note: Take the Poll – Should we hold hands during the Lord’s Prayer?]