Weird Things Happen: What I Saw At Medjugorje 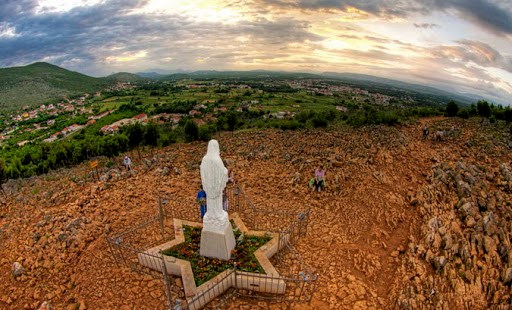 A skeptic comes to believe in miracles

I was an Anglican curate when I saw the sun spin. It happened like this. One of the teenagers in the parish had been to Medjugorje and suddenly got keen on the Blessed Virgin Mary. He joined a Medjugorje prayer group and twisted my arm to go with them on a visit to the Bosnian town where the Virgin Mary was supposed to have been appearing to some local youngsters. I resisted, pleading poverty. Then someone in the pilgrimage group wiped out my excuse by offering to pay my air fare.

So former Evangelical that I was, I climbed on the plane with a mixed load of Anglicans and Catholics to fly to Bosnia. There was an extraordinary sense of joy in our group of pilgrims and I eventually succumbed and started having a good time. On arrival we settled into our hostel and scouted the village to find the main landmarks. Part of the orientation was getting used to the prayer routine. The large church in the town was in constant use. Mass followed mass in a whole range of languages throughout the day. Then at six o’clock in the evening everyone stopped to begin saying the rosary. At six forty every day, after praying the first two sets of mysteries, the visionaries fell to their knees and had their daily visit from Mary. Then everyone finished the rosary by reciting the glorious mysteries.

On my second day I was sitting on the balcony of our hostel with Esther—a middle aged Anglican from my own parish. It was six o’clock. Time to start the rosary in union with virtually everyone else in the town. The sun was blazing high in the sky in front of us. I noticed at the time that the splash of light which was the sun was also reflected as a splash of light in the bonnet of the car below us. We prayed the rosary together. Then at six-forty on the button Esther gave me an elbow in the ribs. I opened my eyes and looked up. The sun—which before had been a blaze of light impossible to look at—was now pasted in the sky like a white wafer. Then it seemed to spin back and forth like a Catherine wheel. I thought my eyes were playing tricks on me. But Esther was seeing it too. Furthermore, I looked down to the bonnet of the car and saw the spinning disc reflected there as well, so it couldn’t be just my imagination. I witnessed the same phenomenon on two other days that week. In addition, many people we spoke to all around the town saw the sun spinning at the same time on those days.

At the time my own journey of faith had brought me from the default fundamentalism of my upbringing to a middle of the road, somewhat skeptical Anglicanism. Faced with the whole phenomenon of Medjugorje I had some questions. What was going on here? Not only was the spinning sun weird, but the place was crawling with stories of spooky goings on. People said their rosaries turned gold when they came back from Medjugorje. Folks were passing round "miraculous" photographs with images of Mary appearing in a photo of a rose, strange shafts of light appeared in photos where there was nothing visible to the naked eye at the time. People reported healings, dramatic conversions, speaking in tongues and people being "slain in the Spirit." I was skeptical. But I was also delighted.

Maybe I was delighted for the wrong reason. I wasn’t delighted because the miraculous was suddenly giving my faith a booster shot. I was delighted because the weird events upset the status quo. In the midst of staid, respectable and rational religion this stuff was clearly scandalous. Furthermore, I got the impression that much Anglican rational religion was more a question of taste than real rationalism. "After all," I could almost hear the biretta brigade sneer, "it would be so common to accept something as vulgar as miracles!" I thought of the sort of religious snob who sniffs, "Enthusiasm, sir is odious," and was delighted because the spinning sun and visions of the Virgin to peasants knocks him for a loop. I like television evangelists, faith healers, weeping Madonnas and the Shroud of Turin for the same reason. Such things irritate all those who worship at the altar of good taste. They annoy the heck out of the rationalists who insist there must be a material explanation for everything.