So God Walked into this Presidential Debate 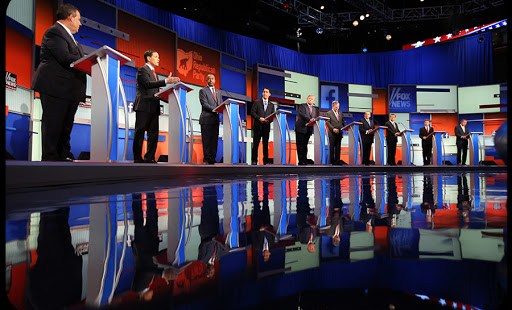 He was invited – no doubt to the dismay of secularists

At the Red State Conservatives conference held in Atlanta right after the GOP Presidential debates former Arkansas Governor, Mike Huckabee, reminded his listeners that the Supreme Court is not the Supreme Being. In a biting dissent in the Obergefell v. Hodges case on marriage, Chief Justice Roberts put the constitutional overreach this way, “who do we think we are?”  Both Huckabee and Roberts were aghast at the Supreme Court’s attempt to effectively declare the Natural Law unconstitutional.

Can we speak of God in the Public Square?

In the prime time Presidential debate, God was invited no doubt to the dismay of many secularists. Mercifully, there was not one Nietzsche or Dawkins reference. There were no guffaws about a Flying Spaghetti Monster. No one quoted the first Soviet Cosmonaut Yuri Gagarin, who was reported to have commented, that he did not see God while he was hurtling through outer space.

Despite the continual efforts of sophisticates to marginalize the Almighty, God seemed, at the GOP debates at least, to be a very large elephant (pardon the pun) in America’s living rooms. One blogger went so far as to suggest that including God in the debate constituted a violation of the constitutional prohibition against the use of religious tests as a prerequisite for holding public office.

At least four questions in the debate included references to God. Such things as social welfare for the marginalized, war and peace, and racial equality were addressed from a religious perspective. The final question of the debate, written by a Facebook viewer, asked how God had spoken to each of the candidates about what should be the next President’s priorities.

Questions on abortion and marriage law surfaced as well.

Many non-attorneys, including Governor Kasich it seems, imagine that once the Supreme Court issues a decision, debate is over. In my over forty years of experience teaching Constitutional Law as a full time professor of political science at several State and Catholic college and universities, I have always noted that if the court did, in fact, have the final say, then the constitutional republic created at Philadelphia would be neither constitutional nor a true representative democracy.
Not everyone would agree with the Chief Justice Charles Evans Hughes’ (chief 1930-41) assertion about the meaning of the language of the Constitution which virtually every law school student is taught to believe from the first day in class. Hughes declared, that the nation lives under the Constitution, but the courts tell us what that Constitution means.  Where does that leave the voters and the two other “co-equal branches?”

Megyn Kelly, one of the debate moderators, pointedly grilled Ohio Governor John Kasich asking how he would explain his opposition to same sex marriage (Obergefell was an Ohio case) to one of his daughters if she came up to him and said she was gay. As Kasich began to speak, she interrupted and he asked her to hear him out. No doubt she was surprised to hear the Midwestern governor’s newly espoused position that the Supreme Court had settled the question in Obergefell and the he and the nation needed to move on.  Court decisions should never be considered etched on tablets of stone nor should they be beyond democratic scrutiny. History is replete with examples of cases where past precedents were revisited and revised.