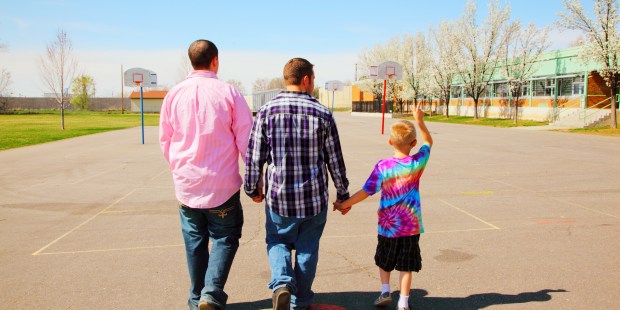 As greater acceptance of homosexual relations has spread throughout American society over the past decade, it has presented a conundrum for Catholic schools: What to do about children being reared by two men or by two women?

While there are worries about any sort of acceptance of a “gay family” by a Catholic parish or school being construed as approval of a certain lifestyle, or exposing other children to certain family arrangements, parishes are also concerned about alienating anyone from the faith.

And the fact still exists that an innocent child, in need of a Catholic education, is not responsible for the choices made by the adults in his life.

Now that the Supreme Court has barred all states from restricting marriage to one man and one woman, the dilemma may only become more widespread. One diocese has decided to implement a policy that, it hopes, will uphold Catholic teaching while being compassionate to all involved.

 The Diocese of Springfield in Illinois now requires all parents, adoptive parents and legal guardians to sign a Family School Agreement before being allowed to enroll a child in Catholic schools in the diocese. The agreement indicates that parents or guardians understand and agree that children will be taught the teachings of the Church “in their fullness,” pledge full cooperation with the school and parish “to prepare their child(ren) to be a disciple of Jesus Christ, and…make every effort to supervise their child(ren)’s commitment” to the agreement. The policy, promulgated in July, reads in part:

The policy could apply equally to a heterosexual couple who are living together without being married or a couple who are in a second marriage, where one or both partners are in a previous marriage that is still considered valid.

All such situations, whether of a homosexual or heterosexual nature, should be kept private, according to another provision in the new policy:

CNSNews.com said the agreement is the result of questions that were raised earlier this year when a homosexual couple wanted to enroll their child in Christ the King in Springfield. The couple ended up signing the new agreement, and the child has been enrolled.

Jonathan Sullivan, director of Catechetical Services for the Springfield diocese, said he doesn’t see the need to be true to the faith and reaching out to the margins of society, as Pope Francis has urged the Church to do, as mutually exclusive.

“When the situation arose, the conversation we had internally was, ‘How do we welcome these families?’ It was never about keeping anyone out or putting up roadblocks. We have always, and continue to, welcome families who are not living the fullness of the Catholic faith into our schools,” Sullivan said in an interview Thursday. “From our standpoint, the conversation is about how do we continue to do that with integrity? Not downplaying what we teach and not pretending that we don’t have an evangelizing mission in our Catholic schools, but how to continue to welcome people while extending to them the Gospel.”