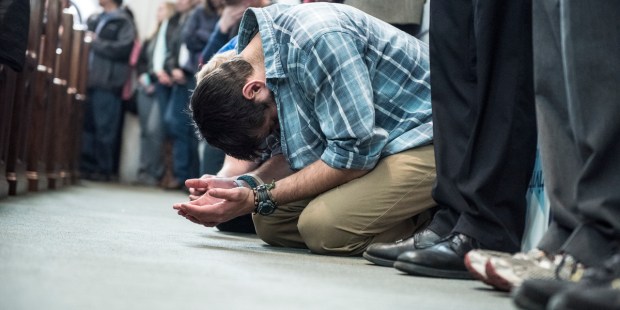 The news is not all bad

There may be a measure of angst for some Catholics over the new Pew Forum Study in anticipation of the papal visit. Despite its title — “U.S. Catholics Open to Non-Traditional Families” – only half of the findings were related to hot-button issues, but the spin is on. Still, there are some intriguing statistics for evangelizers.

For the purpose of analysis, we can break this study into five sections but first, it is worth mentioning that the Catholic sample in this study is much smaller than the recent 2014 Religious Landscape Survey. That study interviewed 7,200 Catholics and claimed a 1.5% margin of error. This latest report contains margins of error up to plus or minus 10.3% percent (!) where millennials are discussed, because only 120 millennial Catholics were interviewed.

Pew’s look at former Catholics in considerable detail is very useful. In fact, the study describes a new kind of “former Catholic”: people who no longer considers themselves to be a Catholic in terms of “religion” (and may now be properly called “Protestant” or “None”) but who nevertheless identify as Catholic or “partially Catholic”, either culturally, ethnically, or because of their family background. Pew calls this group “cultural Catholics”.

1) 20% of US adults when asked what religion they belong to, say they are Catholic. That’s about 50 million adults.

2) The new category: so-called “Cultural Catholics”. 9% of US adults who described themselves as non-Catholic religiously, when asked a second question as to whether or not they currently consider themselves “Catholic or partially Catholic”,  say “yes”. About 22 million adults.

Pew says “About one-in-eight cultural Catholics who were not raised in the faith (13%) name participation in specific kinds of Catholic activities as the basis for their Catholic identity. This includes 6% who say the sacraments are important in their lives and 5% who say they attend or attended a Catholic church. Those Catholics involved with the New Evangelization – whether clergy or lay – should feel encouraged by these findings.

3) 9% of US adults are “Ex-Catholics”, or about 22 million adults. Roughly 10 million are now Protestants and 10 million are “Nones” or “religiously unaffiliated”. 2 million have joined some other faith. These are the hard core “I’m not Catholic” group, 89% of whom say they are not open to returning.

4) American adults who are not Catholic by religion or culture but are still “connected” — the majority because they have Catholic parents or a Catholic spouse but some because they attend Mass a few times/year — (CARA research found that 2% of those at Mass on a given Sunday are not Catholic, including adults from non-Catholic background in RCIA).

When you add it all up, 45% of American adults (112.5 million) have some Catholic “connection”. As disciple-makers, we have a whole lot of bridges to walk across.

The good news is that 84% of Hispanic Americans have some kind of connection with Catholicism.

The bad news is that only 45% answer “Catholic” when asked what their “present” religion is.

(It’s worth noting how the language of these surveys is changing to reflect our realities, acknowledging that being part of a certain “religious faith” is a “present” thing – not necessarily a life-long inherited thing.)

91% of US Catholic adults are cradle Catholics, and 9% are converts

Converts: the percentage of converts to Catholicism in each generation becomes smaller, the younger you are.

(In 2000, a US Bishops’ study of RCIA found that college graduates made up over half of all who are finally received into the Church at a time when only 25% of American adults had college degrees. The person least likely to finish had a high school diploma or less. RCIA is functionally being run by-educated-people-for-educated-people”.)

And this is not good news: in terms of Mass attendance, converts make up 11% of those Catholics who seldom or never attend Mass.

Pew pollsters asked this question about 10 different beliefs or religious activities that were described briefly: ” ________ is essential, important but not essential, or not an important part of what being Catholic means to them personally”

So the question was all about “what being a Catholic means to me personally.”

Two highest results were about 1) believing in the resurrection of Jesus and 2) having a personal relationship with Jesus.

This is the first time I have ever seen a study ask Catholics a question phrased in terms of “personal relationship with Jesus” and that alone is very intriguing. 68% of Catholics responded that “having a personal relationship with Jesus” was essential to what being Catholic meant to them and 67% said that believing in the resurrection of Jesus was essential.

We know that the Catholic (as in religion) adult population has dropped from nearly 25% of the US adult population in 2007 to only 20% in 2015. The Pew 2014 Religious Landscape Survey found that 41% of US Catholic adults (32 million) have “left” the faith and the ones most likely to do so are those who didn’t practice, who didn’t show up at services. We also know that Mass attendance rises and falls with the percentage of a generation that is certain of the possibility of a personal relationship with God (Pew 2007 Religious Landscape Survey).

Which brings us to Sin: This

But there is a big divergence between the Church’s teaching and the views of Catholics when it comes to views of concrete behaviors as sin. For instance, only 33% of Catholics believe that living with a romantic partner outside of marriage is sinful and only 17% believe that using contraceptives is a sin. Both findings may suggest one reason that only 43% of Catholics go to confession at least once a year.

So, the gap between what is meant by “personal relationship with Jesus” and intentional discipleship remains broad indeed, but for those who seek to evangelize Catholics within their families, and their parishes, and outside them as well, this Pew study suggests that millions of Catholics are willing to be persuaded back into the pews, with the right outreach. That’s certainly something to keep in mind, as we anticipate the upcoming papal visit to the United States.