The Day the Sun Spun: The Miracle of Fatima, 98 Years Ago Today 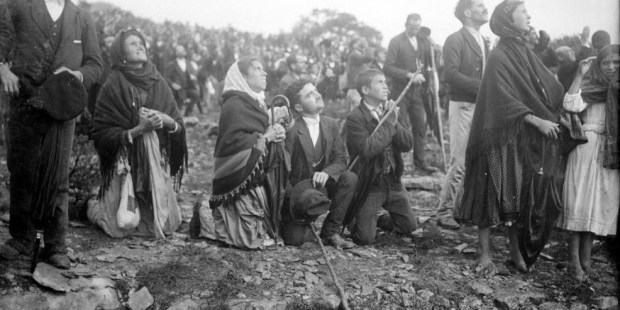 The apparition of Our Lady at Fatima was followed by an unusual solar phenomenon, reported in newspapers and seen by many witnesses

On October 13, 1917, approximately seventy thousand people, from all over Portugal, gathered in Fatima. For many weeks, the news of the apparition of the “Lady” and the miracle she promised to do had spread and among the crowd were people from every walk of life and profession: upper class citizens, engineers, doctors, notaries and, of course, journalists and photographers.

Heavy rain fell. The three young visionaries — Francisco, Jacinta and Lucia — arrived with their family members, and they began to pray the Rosary. At noon, with the rain still falling, Lucia gave the order to close the umbrellas and the crowd obeyed. Moments later, things brightened and those present noticed a white cloud moving around the group.

Lucia asked: “Who are you and what do you want from me?” This time the heavenly Lady said she was the Lady of the Rosary and she wanted a chapel built in her honor in that place. She told Lucia to remember to pray the rosary and announced that she would heal some of the sick present. The Lady ended by calling for conversion.

After saying this, she opened her hands, which reflected the sun. Lucia cried, “Look at the sun!” The thick clouds had split open and the sun began to spin, change color, and dance in the sky as it gradually got closer to the earth. This was the miracle given that all would believe.

The Bishop of Leiria, in his pastoral letter on the Our Lady of Fatima apparitions wrote: “The solar phenomenon of October 13, 1917, was reported and described in the newspapers. It was most wonderful and left an indelible impression on those who were present. This phenomenon, that no astronomical observatory has recorded, and was not natural, was seen by people of all classes and social classes, believers and unbelievers, journalists of the leading Portuguese newspapers, and even individuals from several kilometers away from the place where they were; which dispels any explanation of collective illusion. ”

This article is a translated summary of a story that appeared in Aleteia’s Italian edition.