The Story Behind the Ann Arbor Dominican Sisters’ Appearance on Oprah 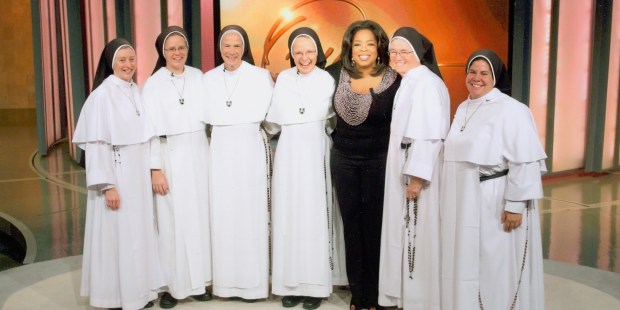 The Sisters of Mary, Mother of the Eucharist will appear this weekend on the OWN Network

It was the last year of the Oprah show in Chicago and production staff were discussing what stories they hadn’t covered in their 25 year history. One woman spoke up. An “authentic” women’s religious community, she said. Oprah was hesitant. “Do you really think a community like that would be willing to be on my program?” she asked. She gave her staff permission to make some calls. All of the communities they contacted said “no,” except for one: the Dominican Sisters of Mary, Mother of the Eucharist.

Founded in 1997, the Ann Arbor, Michigan-based Dominican sisters have always been a community interested in engaging with the culture. The Prioress General, Mother Assumpta Long, and a council of the sisters took the request to prayer and asked for advice.

“Sister John Dominic is a friend of Amy Grant [the singer] who had been on Oprah’s program, so she called Amy to ask for her thoughts,” recalls Sister Joseph Andrew, one of four foundresses of the community. “Amy was very encouraging so Mother phoned back, said ‘yes’ and asked when they would be coming to film, and they responded, ‘this Sunday evening, and we’ll be gone by Monday late afternoon.’ And it all happened in just that manner!”

The Dominican Sisters of Mary appeared twice on the Oprah show in 2010 — on February 2 and again on November 23 for a follow up, after which the television crew followed them back to Ann Arbor to film a profession of vows and the celebration that followed. Both episodes featured a variety of professed and novitiate sisters and on set in the studio were Sister Mary Judith, Sister Maria, Sister Maria Catherine and the four foundresses: Mother Assumpta, Sister Joseph Andrew, Sister John Dominic and Sister Mary Samuel.

Five years later and Oprah isn’t finished with them yet. On Saturday, October 17, the Sisters will be part of a “where are they now?” show on Oprah’s OWN Network.

“After the producers explained why they wanted to do this a third time, we agreed, ” says Sister Joseph Andrew. “The staff apparently said, ‘Get the Sisters back on!!’ Oprah, herself, told us four years ago that we ended up being the third most popular program that year. I think even she was surprised, but I also think she was so open to God’s grace.”

Sister Maria Catherine, who was interviewed on set in Chicago, says that when the Oprah crew first showed up at their motherhouse, “it was clear they had no idea what to do with us.” But when they came the second time, the crew was much more at home with the Sisters’ routine. “They had settled into thinking of us as brides — in fact, it was refreshing to see how they grasped our prayer life and consecration. It was easier to make everything about Jesus, because it was less foreign to them.”

The most recent visit was shorter. The crew followed up with some of the sisters they interviewed before and captured some of the community members’ hidden talents like singing, baton twirling, juggling oranges, and decorating (wedding) cakes.

The producers also asked the sisters about what has changed since they last appeared on the show, and there was no shortage of things to share: Their community has continued to grow and expand. With over 120 sisters now (double their size 10 years ago), their motherhouse is over capacity so they’re temporarily using a Catholic Center in Huntington, Indiana, for extra housing, and they’re building a new priory in the Diocese of Austin, Texas. A teaching order, the community now serves in seven states, including seven dioceses and three archdioceses. They’ve opened new missions in San Francisco, Chicago, Peoria, and St. Clair Shores, and have their first international mission in Rome. Their summer missions have grown and they’ve added another TV initiative with EWTN, as well as launched a virtue education program, which is being used in Catholic schools around the country as well as homeschooling communities.

This list might not surprise a Catholic who knows the impressive work of women religious and the explosive growth of new religious orders in recent years, but those efforts don’t always get fair play in the media. Were the Dominican Sisters of Mary ever concerned about how they would be portrayed on the Oprah show?

“Prudence would always direct caution in such a situation, but we have to honestly say that Oprah and her people were sincere, professional, respectful, full of awe and genuine interest,” says Sister Joseph Andrew. “We became great friends through it all!”

Sister Maria Catherine echoed the need to discern such invitations, but says they were eager to share the joy of religious consecration with the world. “As Mother Assumpta said in the second episode, ‘Oprah gave us a chance to tell our story.’ ”

The Sisters say many fruits have come from their decision.

“The show allowed even more people to approach us…” says Sister Maria (a different sister than Sr. Maria Catherine quoted above). “Christians and non-Christians who may not have felt comfortable before can see us as a friend because they trust Oprah. It’s a great bridge to building a relationship with God’s people, who would otherwise not have entertained talking with us.”

Sister Joseph Andrew believes the shows portrayed religious life as an authentic, life-giving choice, something ancient, but also new, as depicted in the enthusiasm and joy of young women who are “head-over-heels in love” with Jesus Christ and His people.

“In addition to all the visits to our web site, Oprah sent us hundreds of emails that she received…..and yes, we were busy for a long while trying to process the glowing remarks of so many wonderful people!!” says Sister Joseph Andrew. “We were walking on ‘new waters’ for us — but with Christ calling us to come to Him all the while.”

Not only did the Sisters receive instant publicity and awareness by appearing on Oprah, many young women have found the community because of it and have made discernment retreats — some have even joined them.

“We owe Oprah a lot — and she, too, was moved by the intelligent intensity of the young sisters,” recalls Sister Joseph Andrew.  “We believe the Holy Spirit was using her and her efforts to proclaim truth with charity across the airwaves to a very hungry world.”

And what exactly did the Sisters think of the queen of daytime talk?

Sister Maria says what struck her the most was Oprah’s graciousness and attentiveness. “She understands the dignity of [people] in a way that is really quite extraordinary, and she knows that one of the most important things you can do is be present to someone. She knows that this is one of the most beautiful ways to reverence that person, and to love them.”

Sister Maria recalls going to the Harpo studios for the second time and running into Oprah in the hallway outside of the green room. “She put out her arms and said, ‘My Sisters!’ Then she proceeded to give us all hugs. I hope that I am always that warm and welcoming to my guests.”

Sister Joseph Andrew is equally effusive in her praise about Oprah.

“On our visits with Oprah we met a very professional, very human, a warm, enthusiastic, jovial person with a penetrating mind that always wanted to know more and delve into the reasons ‘why’ of our life. She was delightful in every way and we all came away feeling we had gained a new friend. It’s easy to understand her success — she genuinely is interested in everyone, tells the truth as she sees it, and is a warm and very accepting person, as long as you can convince her that what you believe and how you live your life makes sense….at least to you!”

As for what the Sisters hope will be the fruit this third time around, Sister Maria expects that God will use it as He chooses:

“If it touches only one soul, it will be enough.”

(Photos courtesy of the Dominican Sisters of Mary, Mother of the Eucharist)

Zoe Romanowsky is Lifestyle Editor and Video Curator at Aleteia