Shortage of Priestly Vocations? Not at This Midwestern Parish 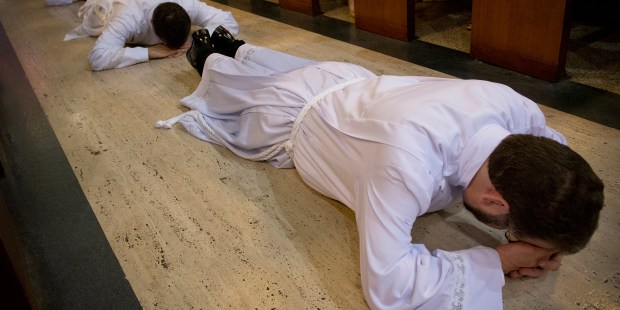 Saints Peter and Paul in Naperville, Illinois, lets us in on their secret

The Second Vatican Council described the Eucharist as “the source and summit of the Christian life.” A parish in the Midwest seems to be demonstrating how the sacrament instituted by the Lord on Holy Thursday is also the source of vocations to the priesthood.

When asked why they thought so many young men from Saints Peter and Paul parish in Naperville, Ill., were priests or seminarians, one person after another affiliated with the parish pointed to the parish’s focus on the Eucharist, including the presence of a perpetual adoration chapel.

“I am of the opinion that the chief cause of so many young parishioners being open and willing to follow God’s call for their lives is the perpetual adoration chapel,” said James Guarascio, 22, a lifelong parishioner who is studying to become a priest for the local Diocese of Joliet, Ill. He described the chapel, which was initiated 12 years ago, as a place where people are “free to encounter Jesus intimately whenever.”

“Innumerable prayers are being offered up in support of the priests, seminarians and vocations,” Guarascio said. “A haven of silence and encounter exists where people can calm themselves in the presence of God and actually listen to where he is calling them.”

Having the chapel available 24/7 requires sacrifices from members of the 4400-family parish. At least one person needs to be there at all times, even in the middle of the night.

Father Thomas Milota, the pastor for the past nine years, said that’s no problem. “All hours are covered with many hours having multiple adorers.”

“That kind of powerhouse of prayer really helps prepare the ground for the seeds of vocations to flourish,” said Father Conrad Murphy, 28, a former parishioner who was ordained last year for the archdiocese of Washington DC.

“When one is given the opportunity to encounter the Lord in the silence of adoration, one is able to hear him speak,” said Father Paul Solomon, 27, a lifelong parishioner who is now parochial vicar at St. Dominic’s in Bolingbrook, Ill.

There were 3,650 seminarians in the United States in 2015, according to the latest data available from Georgetown University’s Center for Applied Research in the Apostolate. That’s up from 2014, when there were 3,483, but still far from the high-water mark of 8,325 in 1965.

Parishes like Saints Peter and Paul are responsible for a good part of the increase. Father Milota attributes the success to a number of factors.

It’s not just vocations to the priesthood. There are also at least four young women from the parish who are seriously considering religious life.

“It’s the culture of the parish. It tends to be a very devout parish with a tremendous devotion to the Holy Eucharist and a reverent celebration of the Eucharist,” he said, citing masses celebrated strictly according to liturgical norms, a large Corpus Christi procession each spring, among other things. “The schoolchildren chant the Mass parts in Latin, and there is nothing like hearing kindergartners chanting the Sanctus with all their hearts,” he said.

Saints Peter and Paul is known as a more “traditional” parish, with an emphasis on orthodoxy in teaching and reverence in worship. Even the architecture sends a message.

“It’s beautiful aesthetically,” said Mary Beth Zabinski of the 1927 Neo-Gothic Revival church. “It’s breathtaking when you walk in, with its high ceilings. You really feel like you’ve gone to Mass there. It’s not modern.”

“I think most of the young men who want to enter the priesthood want the tradition,” said Zabinski, who coordinates the parish’s American Heritage Girls troop. “They don’t want something from the ’70s.”

“We try to do things according to the teachings of the Church, the mind of the Church,” Father Milota confirmed. “Over a long period of time, there have been many priests, including myself, who desire exactly that — fidelity to the Church. There’s an environment here where families will support children interested in a religious vocation.”

There are signs everywhere of a more traditional approach to Catholicism. The sacramental life of the parish is not sparing, with three daily masses and 11 masses between Saturday evenings and Sundays, including a traditional Latin Mass. There were six masses on Ash Wednesday. There are hours and hours of confession available, and there are regular novenas and benedictions.

It helps, of course, that there are three resident priests at the parish, assisted by seven permanent deacons. And a priest of the Personal Prelature of Opus Dei comes regularly to give conferences.

From the looks of things, they don’t take much time off. In response to a recent call from Pope Francis for parishes to open their doors for confession, for example, Father Milota designated March 11–12 as “24 Hours for the Lord.” Priests will be available from 8 a.m. until 8 p.m. on both days to hear confessions. The special event is intended to be “a time of reflection and prayer, an opportunity to speak with a priest, and a chance to rediscover … the great mercy at the heart of the Catholic faith,” says a bulletin announcement.

The dedication of the priests made a big impression on Kevin Glowiak, who was able to live in the rectory for a time, while he was discerning a vocation to the priesthood. Glowiak, 29, is now a postulant with the Franciscan Brothers Minor in Fort Wayne, Ind.

“I was constantly perceiving…terrific models in all the priests who lived in the rectory,” he said. “Each of them displayed mature, heroic, self-giving and self-sacrificing spirits as they gave themselves over to meet the challenges that face their vocation.”

Socially, the parish has pro-life groups, Knights of Columbus, Legion of Mary and many other societies, and there are plenty of opportunities to practice Christian service in a group of like-minded parishioners. That includes a program to mentor homeless families along a path toward self-sufficiency and a “funeral choir” that seeks volunteers to sing at funerals and help ensure that families don’t feel alone when they need to say good-bye to their loved ones.

But there are reminders in the bulletin and from the pulpit that Catholicism is not merely a social club or a social welfare organization but a means of salvation. “To disregard completely the law of fast and abstinence is seriously sinful,” a note in the bulletin reminded readers for lent — to cite just one example.

In addition to the parish’s orthodoxy, reverence and focus on Christ in the Eucharist, the presence of many priests who are not only dedicated servants but also deeply involved in the life of the parish provides an example that young men say inspires them.

“Saints Peter and Paul really provided a wonderful environment for my faith to grow and great priests who were joyful and encouraging,” said Father Murphy. “The priests were a regular part of our lives, came over for dinner, taught classes at school, hung out with us on the playground and taught us how to serve Mass and pray. I really sensed their own spiritual fatherhood, how proud they were of me and my classmates.”

The priests at the parish were not afraid to encourage vocations, he added. “I was approached by many priests about being a priest myself, though not in a scary or overly aggressive way,” he said.

Added James Guarascio: “There were usually about three diocesan priests living and working at Saints Peter and Paul of all different ages. I encountered the diocesan priesthood in many forms on a very frequent basis there.” He said he had received many personal invitations from priests to consider the presbyterate.

Parishioner Max Behna, 24, who is studying at the Seminary of Our Lady of the Lake in Mundelein, Ill., had thought about the priesthood as a child, but when the thought came back to him as a young adult, he resisted. One Sunday after Mass, however, his mother mentioned his interest to Father Milota, and the next day, Behna got a call from the parish secretary, inviting  him to an upcoming “Operation Andrew” dinner, an informal evening where young men have a chance to discuss the priesthood with the bishop, the vocation director and other priests.

At the time, Bishop Peter Sartain headed the diocese. “He seemed to radiate a level of joy that was not of this world,” Behna wrote in a reflection at the website of the diocesan vocations office. “It seemed quite evident that he was giving his life over to something great and holding nothing back.”

Even “outsiders” seem to find the parish’s love of the Eucharist and service to Christ hard to resist. “A seminarian who is not technically our parishioner but who notes midnight Mass at our parish as the launch point for his vocation is Ryan Adorjan,” Father Milota said. “He was serving Mass at our parish, and it profoundly affected him.”

Adorjan, 23, told Aleteia that when he served at the altar at Christmas midnight Mass in 2010, he met a seminarian for the first time. Mysteriously, he said, he heard his name being called and then heard the word “priesthood” being repeated over and over.

He’s now in his second year of theology studies at Our Lady of the Lake Seminary in Mundelein, Ill.

Like Adorjan, so many young men have heard a particular call while at Saints Peter and Paul. The call is not always the same, nor is it always so clear. But the fact that so many have answered suggests that the parish is doing something right.

Ordained in 2015 for the Diocese of Joliet

Ordained in 2015 for the Archdiocese of Washington DC

Ordained in 2014 for the Priestly Fraternity of St. Peter

Studying for the Diocese of Joliet

Max Behna, 24, Ryan Adorjan, 23, both in second year of theology at the Seminary of Our Lady of the Lake in Mundelein, Illinois

In formation for The Canons Regular of St. John Cantius, Chicago

In formation for the Franciscan Brothers Minor, Fort Wayne, Indiana

Seriously discerning or planning to enter within two years: