Masses for the Living: A True Act of Mercy, In Any Year 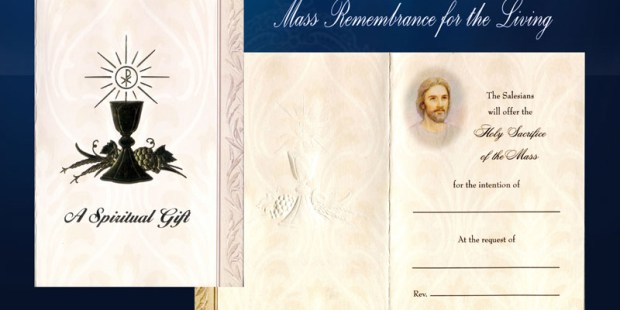 Why wait until someone has died to have masses said for them?

9) Have masses said for the living: friends and family members, even strangers you read/hear about, who are having a hard time.
— 56 Ways to be Merciful in the Year of Mercy

In his homily for the funeral of his father, Reverend Paul Scalia expressed his gratitude, “for the many prayers and Masses you have offered at the death of our father, Antonin Scalia.”

Arranging to have Masses said for the dead is a very good tradition, and something of a “twofer” for Catholics. First, offering a Mass card answers the human urge to be able to “do something” when there are very few genuine (and lasting) opportunities to help. Second, it is an authentic act of charity, both for a bereaved family and for their deceased member. Masses for the dead are supplications made to Christ Jesus, meant to speed the perfecting of souls we presume to be in purgatory, “…for the Day will disclose it, because it will be revealed with fire, and the fire will test what sort of work each one has done. If the work which any man has built on the foundation survives, he will receive a reward. If any man’s work is burned up, he will suffer loss, though he himself will be saved, but only as through fire.” (1 Corinthians 3:13)

At wakes, it is not unusual to hear someone ruefully remark that all the flowers around the room might better have been sent to people while they are living, and that is very true. But we might say the same of the Mass cards. Helpful as they are in light of eternity, how much might Masses said for people during their lives be conduits of needed spiritual graces? How might they help our family and friends to be more attentive to the promptings of the Holy Spirit in their lives, more willing to “walk by faith and not by sight” during difficult times, and perhaps even more inclined toward simple joy and well-being?

It has been our habit, my husband and mine, to present Mass cards to parents of a newborn — to let them know that throughout their child’s life, he or she will be remembered at Masses. We send smaller, one-year cards to people who are facing hard times — experiencing illness or difficulties in marriage or employment; it lets them know in a demonstrable way that we are “with them” and thinking of them; that we are praying for them, ourselves. We take the Masses for a year because doing so is a sign of optimism — a hope (and belief) that twelve-months hence, their situation will be very different. When it is possible, we schedule Masses at local parishes for friends who are preparing to undergo surgery, and when we give them the card, we also encourage them to seek an anointing.

One peripheral benefit of buying beautiful Mass cards — a material one, because matter matters, too — is that they give real monetary support to the monastic houses, convents, missions, and parishes from which we purchase them.

To make the effort to have Masses said for the living is a purposeful act of charity, and because the Mass is the most powerful prayer in which we can participate in supplication for another, it is a profound act of mercy, whatever the year.