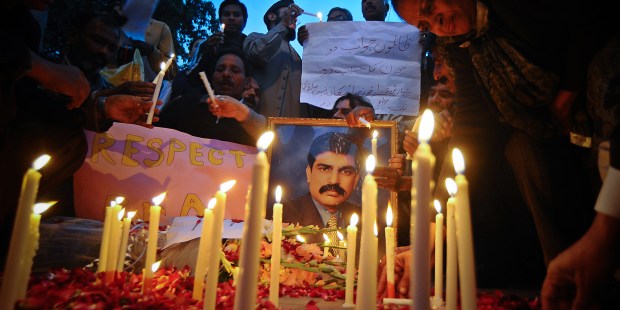 It has been five years since a Catholic government official in predominantly Muslim Pakistan was assassinated, and there is a move afoot to introduce his cause for canonization.

Shahbaz Bhatti, a member of Pakistan’s National Assembly and the country’s first federal minister for minority affairs, was gunned down in Islamabad on March 2, 2011. He had been an outspoken critic of laws that prohibit any criticism of Islam or the Prophet Muhammad or desecration of the Quran. His killers remain at large.

Fides news service reported that the Diocese of Islamabad has begun collecting testimony in view of a diocesan inquiry that could lead the Church to declare Bhatti a martyr. Bhatti was the only Christian in Pakistan’s Cabinet. His murder followed the assassination of Salman Taseer, the Muslim governor of Punjab province, who also was killed for his opposition to the so-called blasphemy laws. Both men had championed Asia Bibi, a Christian woman who was sentenced to death for blasphemy and is still in prison, waiting for her appeal to be heard.

The fifth anniversary of Bhatti’s death coincided with the funeral for the man who assassinated Taseer — Mumtaz Qadri, his own bodyguard, who killed him while invoking the Qur’an. Qadri was convicted by an anti-terrorism court and sentenced to death. He was hanged on Feb. 29.

“In Islam, anyone who dies for the faith is declared shahid, a martyr. For the Catholic Church the process is longer, but a diocesan investigation regarding the matter can be started five years after the person’s death,” Father John Williams, a member of the Islamabad diocesan Justice and Peace Commission, told Fides. “In the diocese we have begun collecting all the necessary information.”

“We Pakistani Christians are called to bear witness to the Gospel of Jesus Christ,” Father Bonnie Mendes, who is from Faisalabad and knew Bhatti from childhood, told Fides. “Our vocation is to live the Gospel in Pakistan. This means being men and women of peace, responding to evil with goodness, willing to carry the cross with Christ. In this mission we confide in salvation which comes from God not from men. This is the mission lived by Shahbaz Bhatti. He learned from his father to have deep faith and to be faithful to the end.… He wanted emancipation for everyone especially the poor and marginalised. For this he gave his life.”

Bishop Anthony Lobo, emeritus bishop of Islamabad Islamabad, attested to that four years ago, when he told Fides that although Bhatti “had little desire to so, he decided to play an active part in politics in order to protect the country’s Christians and other minorities.”

“He realized he was in danger but went ahead in his intent,” concluded Bishop Lobo, who died in 2013.

The U.S. Commission on International Religious Freedom (USCIRF) marked the fifth anniversary of the assassination by renewing its call for repeal of the blasphemy laws. “Shahbaz Bhatti, a close friend of USCIRF, was murdered for his tireless support of religious freedom and his campaign against Pakistan’s blasphemy law, a law that conflicts with fundamental human rights protections,” said USCIRF Chairman Robert P. George. “It is long past time for the Pakistani government to bring to justice Bhatti’s killers, reform and then repeal the blasphemy law, and release, pardon and ensure the safety of all individuals imprisoned for blasphemy.”

A statement from the commission said that the blasphemy laws are often used against members of religious minority communities, including Ahmadis, Christians and Hindus, as well as Muslims who hold views that extremists and others deem “un-Islamic” or offensive. It added that Pakistan detains the greatest number of individuals for blasphemy of any country in the world.

“The Pakistani government’s enforcement of its blasphemy law fosters a climate of impunity that emboldens religious extremist groups, their sympathizers and others to target religious minorities and those with whom they disagree,” George said.

Mohammad Sherani, head of the Islamic Ideology Council, a consultative body of the Pakistani government, said that the number of reports for blasphemy in Pakistan is on the rise. In recent weeks Sherani has spoken of blasphemy laws being wrongly used.