Politics Today: Looking for Messiahs in All the Wrong Places 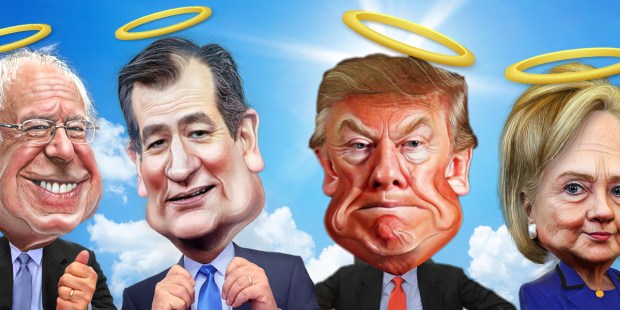 Pope Benedict XVI helps a girl out, as she ponders the electoral shenanigans

Watching the bizarre personality cults being built around our political candidates, I’m wondering, Has our country gone crazy?

Gone are the days of dull but decent candidates laying out feasible, unglamorous policy positions. If we doubted our era had reached peak “bread and circuses” irrelevancy, we need only look at the clash of screaming demagogues who populate our debate stages while the crowd bellows and the press gives thumbs up or down.

Nearly a decade after its publication, Benedict XVI’s Jesus of Nazareth can help us understand the disease that has infected our national politics, through a discussion of the third temptation endured by Christ. This is where the Devil tries to lure Jesus with promises of unlimited political power, control over every kingdom on Earth. With such power, the world could be remade and perfected:  an end to suffering, war and poverty; the establishment of a kingdom of tranquility and fairness.

Our current political mood seems to me an incarnation of this same devilish temptation, aimed at the voters.

Benedict says, “The interpretation of Christianity as a recipe for progress and the proclamation of universal prosperity as the real goal of all religions – this is the modern form of the same temptation. It appears in the guise of the question, ‘What did Jesus bring then, if he didn’t usher in a better world? How can that not be the content of the Messianic hope?’” (Jesus of Nazareth 42-43).

For many Americans in the Protestant tradition, America is supposed as a New Israel, the Promised Land where believers find security, prosperity and freedom. Facing economic and social overhaul, diminished in the eyes of other nations, the temptation to identify a savior and install him to power in order to “save America!” looms large. And like the Jews of the first century, the desired savior should be a political leader, one who will “kick out the foreigners, subdue our enemies and return us to greatness.” Demagogues on the right pander to these impulses, promising an America with fewer immigrants, more strength and respect abroad and a more combative culture at home.

On the left, of course, we see demagoguery in service to social concerns. They represent the ideal Messiah for people who believe that our pain and suffering come from a simple lack of wherewithal, which might be evened out if only the government was given the power to redistribute revenue as it deems necessary. This ideal also drove Judas to criticize the penitent woman for anointing Jesus with costly oil (and Jesus for allowing it), suggesting that acts of faith had no value unless they served specific social needs.

When a nation is seeking a messiah, elections boil over with passionate fervor that contains a religious component, but it is false religion: if your candidate is the savior of the nation, his opponent must be an evil counterpoint, leading people astray. The nasty turn that our electoral process has taken in the past few decades is simply what happens when people are looking for a messiah empowered by what is earth-bound.

Writes Benedict: “To the tempter’s lying divinization of power and prosperity, to his lying promise of a future that offers all things to all men through power and through wealth, [Jesus] responds with the fact that God is God, that God is man’s true Good” (45).

Our current mess of messianic politics weren’t inevitable. They are a rational response to a direct failure on the part of the Church — that being all of us, not just the institution. If people are drawn to false messiahs, it is because we have failed to introduce them to the True Messiah; when our friends and family members become disconnected — “spiritual but not religious” – and shaking impotent fists at the broken world, it is because we have been too embarrassed to proclaim the truth.

People have realized that there is a great emptiness at the center of their lives but do not know what can fill it. In this moment we don’t need dazzling showmen; we don’t need professional politicians making one last grab for power. We need preachers and catechists, and we need evangelists (that would be you and me), people who can show the lost where home is.

In a sense it doesn’t matter who is on the ticket in the fall. Our mission remains the same no matter who is running: pull them back from the illusions of worldly saviors and into the reality of Christ.

If we’re horrified at what our nation’s politics have become, there’s only one way to respond: we must become missionaries in our own communities, finding the broken and sharing the good news that we’ve been too shy to proclaim.

Benedict has diagnosed the problem with our politics, and Francis has loudly proclaimed the solution. Go out, build bridges with your neighbors and spread the joy of the Gospels.