A Launching Pad of a Parish 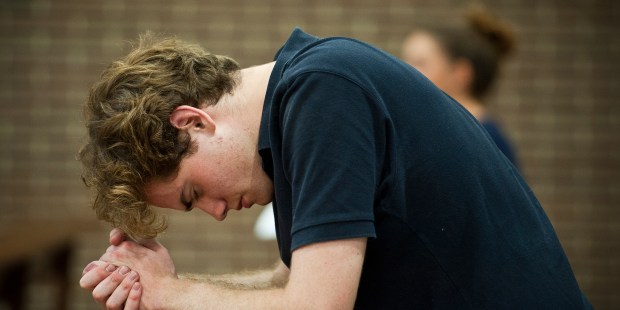 These college students have taken off from home and are rocketing through my parish. Where they will splash down is anyone’s guess

This may surprise those Catholics who compile dossiers on the outrages committed by fellow parishioners’ children — and those parents fearful that their broods have become objects of hostile surveillance — but few kids attend Mass with me. Or rather, few children of the crying-room age do. With its longstanding connection to Arizona State University, and its more recent one to the University of Mary, my parish’s 7 p.m. Sunday Mass attracts mainly college students, visiting parents and a sprinkling of faculty.

During the fall and spring semesters, these people can be counted on to fill the seats and then some. The chapel is new and constructed on a fairly optimistic scale, but if you arrive less than a quarter-hour early, you risk having to hold up the back wall or to watch the service from behind the glass doors leading to the vestibule.

Simply by being present — and, ideally, by growing — families with young children serve to provide a parish with a sense of continuity, but they’re not the only ones who do this. Universities might not beget, strictly speaking, but good golly, do they ever burgeon — especially Arizona State, whose student body, now topping 80,000, could fill a small diocese.

I belong to a small, though not negligible, group of old-fart alumni unable to unstick themselves from the flypaper. I don’t know my peers well enough to speak of their motives, but I chose the parish to be baptized and catechized in because its red brick church had impressed itself in my memory during my own student days.  For me, those days were relatively happy and filled with hope, and hope is exactly what I wished to gain by entering the Church.

Movers and shakers get that name for a reason. Highly educated and affluent Americans tend to move to new cities more often than their poorer and less educated counterparts.  Those who make the first of these moves for the sake of a college education are still facing life’s biggest decisions, including what field to enter, whom to marry, when to have kids, etc. Actually, that “etc.” covers a lot. Last year’s Pew survey revealed that 35 percentof all Americans born before 1980 are unaffiliated with any religion.

This parish, then, is like a launching pad — or rather, like one of those multi-stage rockets after the jettisoning of the first stage.  The students have taken off from home, but where they’ll splash down is anyone’s guess. God willing, it’ll be your parish, where they’ll smile sheepishly as their toddlers tear at your corneas with Krazy Straws — but there are no guarantees.

Precisely because of this uncertainty, every time one of them makes a major life choice informed by faith, the Church wins a savorable victory.  It’s been my privilege to observe a few of these. Young parishioners have met and wed. One woman tested a vocation with the Nashville Dominican Sisters. The priest who celebrated Mass last weekend claimed to have been a parishioner in the years before he entered the seminary, though that would have been before my time.