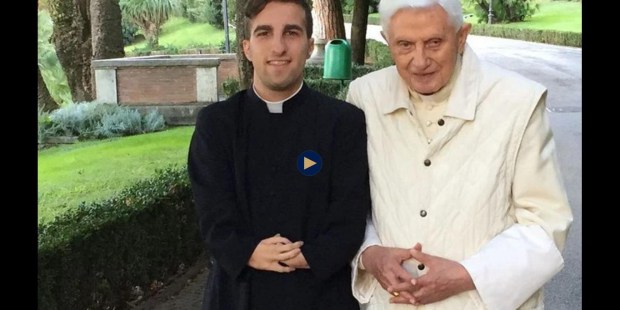 For Rosario Vitale, a dream is not deferred thanks to a papal dispensation by Benedict XVI

Rosario Vitale is a good-natured young man. He is joyful. He always has a smile, encouragement and words of hope for everyone. He always says, “My life is a grace.”

Yet, at age 24, life has dealt him a good deal of difficulty: his hands are attached to his elbows and his fingers fail to grasp and shake.

Rosario’s illness has a name unknown to most, even many physicians. It is called bilateral congenital absence of the radius.

A few years ago his dream of becoming a priest began to crumble when he learned that the laws of the Church in some cases preclude ordination to men with certain handicaps. “Coming out of high school, I thought my path was already mapped out: I would enter seminary, put in the years I had to and become a priest. But this didn’t happen. My difficulties, my ‘defects,’ got in the way. When the rector informed me that I couldn’t enter seminary due to my disability, I felt a sense of frustration, also because I have so many ideas, and so many projects that I might have done over the years had failed.”

Rosario agreed to take a pause, to determine if this was truly his path.

He did so with the determination of someone who was accustomed to fighting, even before birth: the doctor tried to suffocate Rosario in his mother’s womb, so as not to admit to knowing about the malformation. From the time he was just a few months old he has had more than 20 operations on his hands and arms. “Even if my life can’t be called normal, it is special,” he says, “because it puts me in contact with real struggles, but from the perspective of faith.

“I shouldn’t be here, but I am. The Lord wanted me, he has a plan for my life,” he says. Among other things, Rosario is perhaps the only case in the world whose deformity claimed only his hands and arms, “another sign of hope, a sign that the Lord has placed his hand on my head from my mother’s womb.”

From the age of eight he served as an altar boy. Since then, Rosario says, “I was never far from the altar. With the Lord, it was love at first sight.”

Faith helped Rosario to accept and live with his disability: “Faith has given me an incentive, an answer, a reason. Faith tells me that one should never stop before any obstacle; in fact, through hope, one can always go forward, as St. Paul says: “‘I fought the good fight, I finished the course, I kept the faith.’”

Rosario’s life didn’t have any major shake-ups that led him to the priesthood: he had a girlfriend; he thought about being a lawyer. Then, toward the end of high school, he says, “Something made me change my mind. There wasn’t a particular event; it was something that was already inside me that came to fruition at the right time.”

Rosario knocked at the door of the seminary in Caltagirone, in Catania. It was then that he learned he wouldn’t be able to become a priest because of his handicap. It felt like a help, not discrimination. He explains: “If the Church has established this law, is it because she loves her children.” In fact, Rosario adds, “It is a help to these people who believe they can lead a straightforward ministry,” and perhaps they don’t realize that their disability “could do harm rather than good for the Church and the faithful entrusted to them.” One also wants to avoid people pursuing the priesthood to “escape” fear or the impossibility of a life of real relationships, he adds.

But in reality, “lex sed lex does not always last. The canons are not always rigid,” he says. And so it is possible for people whose disability is not particularly serious, such as to impair priestly life, to obtain a dispensation.

Rosario describes what happened in his case: “As suggested, I tried put the idea of entering the seminary out of my mind, and ironically this was what convinced me that my path was the ordained ministry. It’s like when you don’t think about something, but it stands out above everything else, like a jewel that shines more brightly than the others; then you try to grab it before it’s lost.” And so, “after a year of discernment on the part of the superiors, the bishop and I, we asked for a papal dispensation.”

The request must be submitted by the bishop and the superior of the seminary, with all the medical documents attached. Rosario’s dispensation arrived a few months later, confirming that “they did not see in the candidate valid reasons for precluding entrance into the seminary, because my physical problem did not prevent a future priestly life.”

The dispensation was signed by Pope Benedict XVI “to whom I owe so much, including my vocation,” which matured in part at World Youth Day in Madrid.

Watch a video (in Italian) of Rosario going through his day here.

Translated from the Italian by Diane Montagna.