The Easy Act of Witness That Tells Strangers God Exists 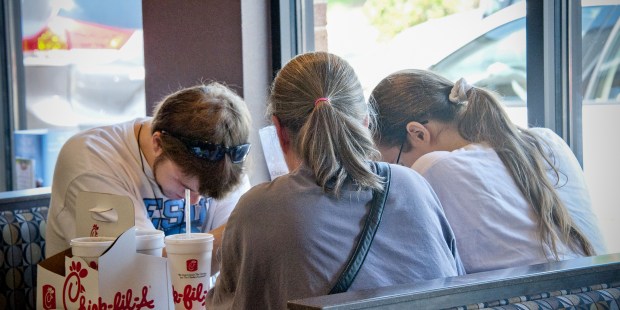 You want to push back against those trying to denude the public square of Christianity? Start small. Start with saying grace before meals even in public. Did I say small? I mean tiny. But tiny does not mean insignificant.

Don’t do it to make a statement, because almost nothing’s a worse witness than the one put on for show. “Hey, people, look at me being a Christian” just makes other Christians want to martyr you.

Say grace because it’s a duty and a privilege of the Christian life to thank God, and for whatever reasons we’ve decided that before we eat is a time we should do that. Say grace in public because the duty is one to be exercised, and the privilege one to be enjoyed, at all times and in all places. It should be as natural as shaking hands when you meet someone.

You may have had this experience too: You go to lunch with someone you know to be a Christian and when your food arrives there’s that awkward moment when you don’t know whether to excuse yourself to say grace or to ask if he wants to say it together. I have had people, including ministers, tell me — usually, but not always, sheepishly — that they never say grace in public. They say that they don’t want to cause a scene or draw attention to themselves or even hold the faith up to ridicule. I think they often just want to avoid having some lout say something rude to them. So they dine as the godless do, as St. Paul might have put it.

I thought about this when asked by the Portsmouth Institute to talk on courage in The Lord of the Rings at their excellent annual conference. (The papers will be published in their journal Conversatio). Tolkien shows courage exercised as a matter of duty and a matter of love, which are often two sides of the same thing. He shows courage exercised in the grand terms of a quest to save the world, but we have our own ways to do our duty and show our love even while living the comfortable life of the American Christian.

So: If grace is something you say before meals, grace is something you say before meals — including meals in restaurants. If it is right to pray at home before you eat, it is right to pray before you eat the jumbo burger special at Bob’s Barbecue and Car Wash or the foie gras at Francoise’s Incredibly Over-Priced French Restaurant. Doing something at home or with other Christians that you’re afraid to do in public risks Jesus’ rebuke that “Whoever disowns me before men, before my Father in heaven I too will disown him.” Personally, this is a risk I’d try to avoid.

Christians say grace to thank God and by doing our duty in this, even in the pub or restaurant, we make a public witness. Think what is lost by the refusal to do your duty, to exercise the tiny bit of courage needed to be the eccentric guy who prays before he eats.

You give up the chance to be one small sign that the Christian faith is a live option and that some Christians exercise their faith in the world. You refuse — and it is a refusal, not a failure — to offer a small but perhaps powerful challenge to the secularist narrative that almost every American accepts and lives by. You miss the chance to insert Christianity into a public world from which it’s been removed.

It is a tiny gesture, yes, true, but not an insignificant gesture, thanking God before you start to eat. It tells people who may not know anything about God or the Church that there is a world in which it is natural to be thankful. It tells them that we know Someone we can thank.

[Editor’s Note: Take the Poll – Do You Say Grace in Public]