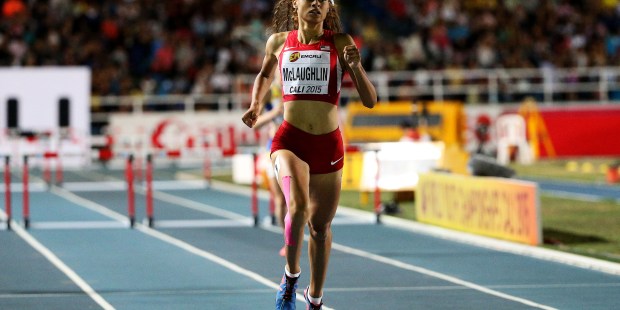 “Sticking to what I know and believing that everything I’ve been given comes from God definitely played a big role for me.”

This year has been rough for Sydney McLaughlin, a 16-year-old from New Jersey.

A few months ago she fell ill with an infectious disease called mononucleosis, her mother suffered a heart attack, and to top it all off she underwent a nervous breakdown before a major qualifying track competition.

Right before the Olympic trials, she panicked and almost turned back. The pressure was intense as it wasn’t anything that she ever experienced in her life. McLaughlin described the feelings she experienced in an interview with the Washington Post.

“I’d gone to the meet a few days before my race… I saw the atmosphere. It was just like any other meet, but at the same time it was on TV, [and] I was getting texts from all my friends. There was just so much more work put into it than a regular high school meet that it became overwhelming at one point.”

Her dad, Willie McLaughlin, knew the pressure all too well and tried to calm her nerves. He was a track star in his youth and raced in the 1984 Olympic trials, reaching the semifinal round.

“Running the Olympic trials was the single most stressful thing I’ve ever done in my life…You’re running against the best of the best just to make those three spots… The stress is off the scale.”

Besides the help and support of her family and coach, what helped her overcome her nerves? What was her motivation?

In an interview with the Catholic News Agency she said, “Sticking to what I know and believing that everything I’ve been given comes from God definitely played a big role for me.” When she was selected to be part of the U.S. team to go to Rio, the amazing turn of events “definitely showed this is God’s plan for me.”

McLaughlin attends Union Catholic High School and her Christian faith has helped her persevere throughout all the ups and downs of her life. It has been a journey and she never expected to be competing in the 2016 Olympic Games in Rio.

She admitted that her sights were on the 2020 Olympics and was surprised with her recent success. After finishing the 400 meter hurdles in an amazing 54.15 seconds, McLaughlin became the youngest member of the U.S. Olympic Track and Field team and set a junior world record. Her time even ranked her seventh overall among any female in the world.

Looking forward to the Olympic games, McLaughlin believes her nerves are up to the challenge and that the experience at the trials helped he realize that.

“Just being told that it’s just a race, nothing different, [helps]. The same lap with the same amount of hurdles, the same distance… It’s really no different than a high school race, just a little bit faster pace. I think that will be the same thing in Rio. It’s a different location, but it’ll be the same thing I’ve been doing.”

Once the games are over, she looks forward to returning to school and continue helping to build up a juggling club. It is one of her passions in life and would love to have the opportunity to perform Olympic juggling if that is ever added to the games.