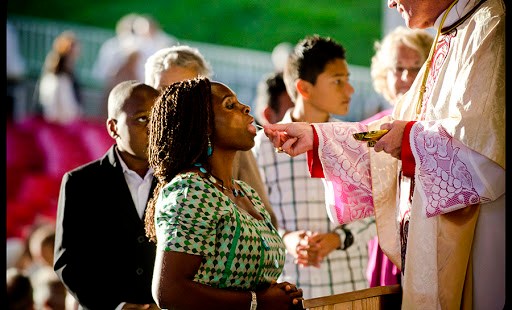 In the news surrounding election seasons, we often encounter media controversy about denying Holy Communion to Catholic politicians who run on a pro-choice platform. Depending on the news source, this is often presented as either a bold move on the part of crusading bishops, or else as an overstepping of pastoral boundaries. But as usual, the truth is both less sensational and more nuanced.

We can start by recalling how, from the time of the Apostles, the Church has always taught the importance of receiving communion worthily. That is, those in a state of mortal sin should not receive Jesus as He is present in the Blessed Sacrament, as this would be to commit the additional sin of sacrilege and endanger their souls even further.  This teaching is incorporated into our current Code of Canon Law in canon 916.

More to read: The bishops should yell at Joe Biden

One noteworthy aspect of canon 916 is that it puts the onus for the worthy reception of Holy Communion on the individual, as it directs Catholics conscious of unconfessed mortal sin to refrain from approaching the Eucharist on their own initiative. Or in other words, a Catholic who is conscious of a relatively hidden mortal sin bears the personal responsibility of behaving appropriately with respect to receiving Jesus in the Eucharist. Canon 916 reflects the reality that the Church’s ministers are not generally able to “read souls,” or make outside judgements on another’s interior spiritual state. In doing so, canon 916 therefore acknowledges that as Catholics we have a basic right to the sacraments, to privacy, and to our own good reputation.

However, the situation is different when a Catholic is, in the words of the immediately preceding canon 915, “obstinately persevering in manifest grave sin.” That is, when a Catholic is knowingly and deliberately persisting in a seriously sinful state or action which is outwardly very obvious and public, canon law imposes upon pastors a duty and obligation to withhold Holy Communion.

Canon law does not give us an itemized list of specific concrete situations which would fall under canon 915. But one familiar example of a case where Communion would be denied in accord with canon 915 is irregular marriage situations, since a couple in an irregular marriage is living in an objectively sinful state (as they are technically either cohabitating or living in adultery), in a way that is readily obvious and common knowledge (as marriage is by its very nature a fully public state). But there are other situations which could fall under canon 915 as well. To give a more extreme case, a Catholic who regularly volunteers at an abortion clinic would almost certainly be “obstinately persevering in manifest grave sin.”

By extension of that last example, it would make sense to conclude that running for a political office on an “abortion rights” platform would likewise fall under canon 915. Intentionally facilitating abortion in any way, shape, or form is unquestionably a grave sin; and to promote pro-choice legislature is to enable abortions in a way which is particularly well-known to the point of being a literal matter of public record. Furthermore, politicians who campaign with an explicitly pro-choice agenda are committing themselves to the promotion of the evil of abortion in a notably consistent, i.e. “persevering,” way.

Although it might be tempting to see canon 915 as a sort of punitive contrast to the more deferential canon 916, it would be much more accurate to understand these canons as two sides of the same coin. Canons 915 and 916 could even be regarded as overlapping “layers” in the Church’s sacramental theology.  For instance, an individual who is denied Holy Communion under canon 915 should have already been abstaining, of his or her own accord, from the Eucharist in obedience to canon 916.

In actual practice, bishops and pastors are first called to admonish and correct privately whatever demonstrably pro-choice Catholic politicians have a residence in their diocese or parish. Naturally, the ultimate goal of this pastoral dialogue would be to lead the politician in question to a moral conversion. But even apart from that best-case scenario, hopefully this kind of conversation would at least be sufficient to guide the politician to refrain voluntarily from approaching the Eucharist, thus avoiding the awkwardness involved in an actual denial of Holy Communion.

Yet it could still happen that a pro-choice Catholic politician continues to insist on presenting him or herself for Holy Communion even after the sinfulness of his or her circumstances has been properly explained to him or her. If a pastor discerns that the politician’s particular situation does indeed fulfill the criteria set out in canon 915, then that pastor would be obligated by the Church’s law—which is always ordered to the salvation of souls—to deny Holy Communion to that individual in order to guard the Blessed Sacrament, avoid scandal, and protect the soul of the would-be communicant.