5 Ways to evangelize, without seeming to 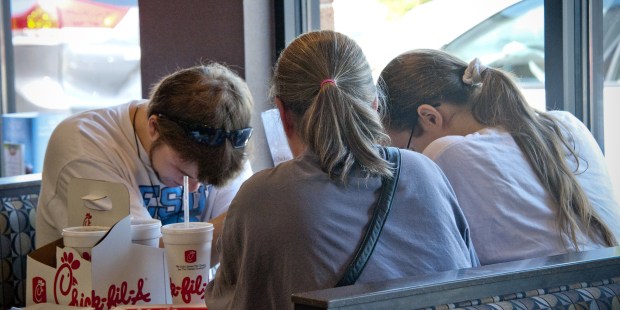 Sharing the faith doesn’t come easy to all of us, but here are some simple ways to do it without being pushy

We Catholics may wriggle at the idea of sharing our faith, but the truth is our baptism comes with a call to evangelize. St. John Paul II spelled it out: “No believer in Christ, no institution of the Church can avoid this supreme duty: to proclaim Christ to all peoples.”

Plain and simple, all of us are called to share the good news of the Gospel.

And anyway, it is good news, after all. But, to be quite honest, just thinking about it makes my palms sweaty. I don’t know Bible verses off the top of my head. I know we don’t worship Mary but I can’t smoothly explain the difference between worship and veneration.

Perhaps most of all, I have grown up in a Catholic culture that has (let’s admit it) ingrained a private rather than public faith life into all of us.

But here’s some good news — not as good as the Gospel itself — but still good: There are simple ways to evangelize without being pushy or having a memorized speech.

Admittedly, this can be tough. In the comfort and privacy of our own home it comes naturally to say grace before enjoying my wife’s delicious Chicken Chile Casserole. In a restaurant, it can seem daunting. You imagine everyone in the place staring while you make the Sign of the Cross as discretely as possible before enjoying that first jalapeño popper.

In reality, most people aren’t looking at you — get over yourself! — but for those that are, seeing a family briefly pray before eating can be powerful witness to others about priorities and the reality of God. It can prompt a discussion, and perhaps a change for others, and have a bigger impact than we know.

2. Being open to life

Raising kids is hard work, and many of us struggle with fertility issues and child loss, but being open to life is one of the strongest witnesses to the faith one can give.

At a recent wedding, we had three people (to be fair, one was the priest) come up to my wife and me as we were wrangling our three kids into submission, to thank us for “being open to life.” While it was tough to appreciate in the moment, it stuck with me that people actually noticed of the mere fact that we had more kids than most, and that it said something to them.

In our Catholic bubble, we can forget how effectively the culture pushes folks to have fewer children: from magazine articles focusing on the “great” lives lived by the childless, to the constant messaging that having more than two children makes you weird, to the cultural selfishness born of prosperity, that says our stuff matters as much as kids.

And that’s the point.

Having more than two kids is an instant conversation starter. Random people want to talk to you about it, drolly asking, “Don’t you know how they’re made?” or “Are you finally ready to call it quits?” or “How do you even manage to get up in the morning?”

When we answer with the truth — that yes, it’s hard but that our children are blessings of unbelievable joy to us — it sends a message people haven’t heard in quite a while: Lots of kids? Worth it!

Evangelization can be as simple as wearing a brown scapular under your shirt; wearing a rosary bracelet on the wrist opposite your watch, or sporting an understated religious medal around your neck. People notice it and pipe up with, “I didn’t know you were Catholic,” or “What’s the deal with that medal you’re wearing?”

So, you tell them. It’s an easy way to “let your light shine before others, so that they may see your good works and give glory to your Father who is in heaven,” without seeming to show off.

4. Putting a Catholic radio bumper sticker on your car

Many of us have benefited from Catholic radio, but haven’t shared with others, Catholic-or-otherwise, where our car radio dial is typically set for those commutes to and from work.

A Catholic radio bumper sticker tells the people driving behind you about Catholic radio; it’s a gentle nudge to tune in and see what it’s all about. You never know how the Holy Spirit will use something as simple as that. There are no limits to what may happen.

Have you noticed when people sneeze in public, the typical response has become “Bless You?”

Making a point of saying “God Bless You” may seem silly, but I really think can be a discrete reminder of the existence of God. We’ve let them push God out of our public squares, let’s not let him be pushed out of our sneezes, too!

Sure, evangelizing can seem like a pretty daunting task, but it doesn’t have to be. There are simple ways to spread the good news, and God has a well-documented habit of using confounding means and people to work his will in the world.

[Editor’s Note: Take the Poll – Do you say grace in public?]