Heading to school with Jesus, in the Flesh 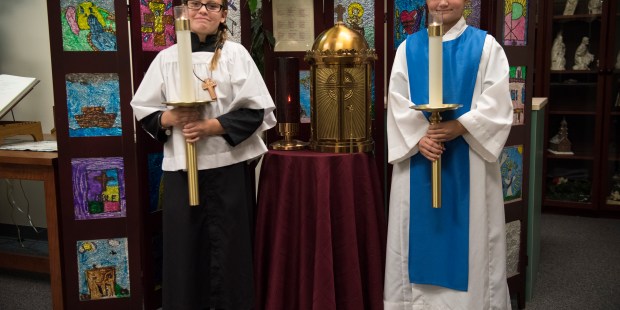 My buddy Rob called me the other day and asked me if I’d be available to “take a few photos” of All Saints Regional Catholic School’s re-dedication of the chapel housed there. Thinking I’d fulfill my good deed for the day by lending a hand, I said, “Sure!”

As I hung up the phone, though, I wondered why a chapel would need a “re-dedication.” Meeting up with my buddy and the school’s new principal on another matter, I got the back-story.

It seemed the chapel had been pretty much ignored in previous years — even used as a storage area. Now keep in mind, this is the room where Christ was present. Something may have been amiss.

I also learned that the school had recently re-installed crucifixes in the main foyer and classrooms and had even put up some statues of saints in very visible places. It seemed the school, like so many people, was undergoing a kind of Catholic reversion. Pretty cool, really.

So I arrived the next day to “take a few photos.” The entire school body celebrated Mass at the church down the street, and there the celebrant explained to the students that Jesus was “coming to the school.” I was sitting by some of the younger students, and you could see their faces light up with hopeful expectation. Exiting Mass, each student was given a white carnation, (“we give flowers to those we love,” said the priest) and then the entire congregation, from pre-schoolers to eighth graders, processed through the parking lot to the school.

It was a sight to behold. Flower-bearing kids, teachers, parents, priests and Jesus Christ, really Present, heading to school.

As the students entered the building followed by the priests and the Blessed Sacrament the mood became strangely intense. There was no music, just the sound of bells, rung every few seconds, and…silence. Silence among all those kids. The students knelt in the tightly packed halls as Christ entered, and looking around I could see that almost every single staff member was in tears. You could actually feel the difference as Jesus made his entrance.

The Blessed Sacrament was transferred into the very heavy tabernacle and was then carried into the chapel by a rather sturdy priest. Each student then went, one by one, into the chapel, placing a carnation at the doorway and genuflecting — individually welcoming the King with a gift.

As I said, there wasn’t a dry eye in the house. The school and its poorly-used chapel became awash in holiness, transformed into a truly sacred space, and every one of us could feel it.

I have had the great fortune of being in the Presence of Christ in extraordinary ways over the past several months: in Krakow with 30,000 youth with Bishop Robert Barron, in a private chapel in New York with the Franciscan Friars of the Renewal. Blessed to adore in Calcutta, with the Missionaries of Charity at the Tomb of Saint Teresa of Calcutta, and in the small chapel at Good Counsel Homes for mothers in crisis, and I can tell you that the experience is always the same. In the silence, and the witness of faith amid those around me, and the unmistakable sense of Holy Presence, I am shaken to my core.

So, my “good deed” for a pal turned out to be a privilege for me, in that I got to experience that very moment when Jesus went to school with the kids, and came to stay. A school that was adrift has, in making Him the very center of what they do and who they are, declared themselves a very Catholic school.

So for those of you who think that Catholic schools aren’t, here’s some good news: this one is. There is hope, and that hope is Christ.

Please pray for all those schools in need of a spiritual renovation because after what I witnessed, and learned from the staff and parents, prayers were heard and answered.

Once again I’m in absolute awe of how good God is and how he works in every small corner of the world for the salvation of our souls, we pitiful wayfarers.