Is Cosmo turning Catholic? Not quite… 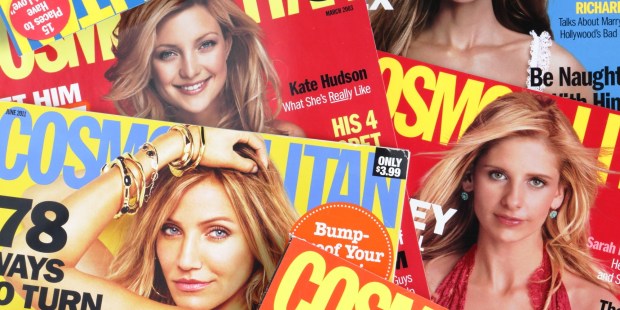 Still, the infamous magazine’s latest issues have looked at consecrated virgins, the Theology of the Body, and even exorcists

Cosmopolitan is described as “the best-selling young women’s magazine in the U.S. [that] delivers the latest news on men and love, work and money, fashion and beauty, health, self-improvement and entertainment.” While most articles published in the magazine focus on outward appearances, over the past year there have been several articles offering spiritual fare.

In fact, it almost appears the magazine is seeking to add “Roman Catholicism” to its list of ongoing topics.

Back in March Cosmo published an article entitled “I’m Waiting Until Marriage — This Is What My Dating Life Is Like.” In it, they interviewed three women in their early 20s who are waiting until marriage to have sex.

What was most surprising was how one woman explained her reason for abstaining from sex. “I decided I wanted to wait when I read St. John Paul II’s Theology of the Body. In it, he discusses how Christ loves us totally, definitely, and sacrificially through his body, and that is what sex was created for us to do as well — to love others totally, definitely, and sacrificially through our bodies.” The woman interviewed cited her “Catholic faith” as the driving force behind her decision to wait until marriage.

Then in September Cosmo posted an article to their website on another Catholic topic, “I Am Happily Married to God — as a Consecrated Virgin.” The article — originally published in Good Housekeeping — features the journey of a young woman who was renewed in faith after attending World Youth Day in Cologne, Germany and began a path to discover her vocation, ultimately responding to a call to be a consecrated virgin.

After World Youth Day, she was given a book that changed her life. What was it? Theology of the Body for Beginners by Christopher West. In it she discovered, “Sex and virginity are gifts of yourself you give — not something you lose. This wasn’t at all about religious jargon; it was about the beauty of being human. I connected in a major way to the idea that expressing love isn’t all about sex. It’s about wanting the best for the other person.”

Most recently Cosmo expanded their Catholic features by interviewing exorcist Father Gary Thomas in “What It’s Really Like to Be an Exorcist.” A few years ago Father Thomas, along with author Matt Baglio, published a book on his experiences called The Rite: The Making of a Modern Exorcist, which became the inspiration behind the movie The Rite staring Anthony Hopkins.

The article by Cosmo is extremely transparent and is a simple Q&A with Father Thomas regarding his experiences being an exorcist, but besides going into the various steps required to determine if a person is possessed or not, Father Thomas has some strong spiritual advice for readers of Cosmo.

“Jesus didn’t come just to be a nice guy. His death and resurrection defeated Satan. When I end my talks, I usually say, ‘Do not be afraid.’ I’m not saying I’m some kind of rough and tough guy. I’m not but I’m not afraid. I didn’t know what to expect when I saw those manifestations in Italy but I was not afraid. Satan is not a metaphor. Satan is real. He’d like you to believe he doesn’t exist and that’s his greatest deception. People need to buck up and realize that we’re not the masters of our own destiny. We have to put ourselves at the disposal of God.”

Father Thomas even mentioned in the article how Ouija boards and “using yoga as a form of power whereby you conjure up false gods” are part of the increase in occult activity that has led to a greater need for exorcists.

It is noteworthy and heartening to see Cosmo, a magazine known more for the idea of “Sex and the Single Girl” than for dishing out spiritual content, publishing such pieces. As Simcha Fisher wrote earlier this year, “Lots of secular people really do want something more” and people immersed in the current culture are “looking around at the dust and the squalor, the disorder and the pain, and they’re thinking, ‘This is no way to live. Let’s see, what else is there?’”

While three articles in a single year do not signify a full-scale trend toward Catholic interests, perhaps the editors of Cosmo are starting to — most commendably — explore whether anything in this world that can “satisfy the hungry heart.” It is certainly a step in the right direction and one can only pray that more of these articles are on the way for future editions.

Our culture is certainly a mess but Cosmo’s small recognition of truths that go beyond what is both material and materialistic can give us some hope. Perhaps after hitting rock bottom, society will begin to stop living “for what does not satisfy,” and look for the One who came “that they might have life to the fullest.”