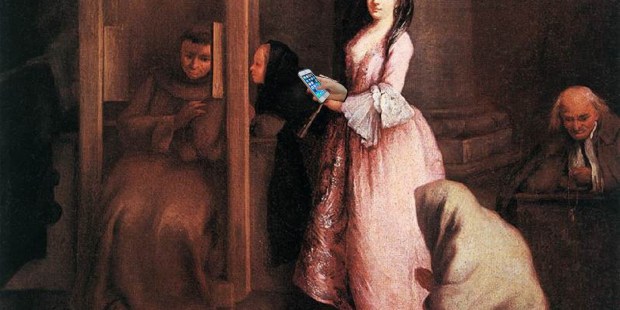 In an era of mobile microphones and apps that listen, both priest and penitent should be prudent about what they carry into the confessional

VATICAN CITY — As our smartphones become smarter and social media expands, so does the risk that your privacy will be increasingly breached.

In light of this, how much of a danger is it to bring your smartphone into the confessional? And what precautions can priest and penitent take?

“All phones have a microphone, and Facebook and many other phone apps require access to the microphone and camera,” said Fr. George Hajj, parish priest at St. Anthony of Padua Maronite Church in the United States. “Therefore we don’t know what technology, and in whose interest it is in, to spy and overhear what is being said in the confessional.”

For Father Andrew Pinsent, Research Director at Oxford’s Ian Ramsey Centre for Science and Religion, surveillance through modern technology has become so thorough that it makes Orwell’s Big Brother fears look almost quaint, like “something from the dinosaur era.” It therefore demands “extra vigilance” to ensure “proper privacy in regard to the sacraments, when matters of salvation are at stake.”

Fr. Pinsent covers cameras “that can be turned on electronically” to prevent snoopers (FBI director James Comey recently advised people to do the same thing). He also has other concerns such as built-in microphones on computers as well as mobile devices (as does Mark Zuckerberg), and the general profiling that comes with browsing. He calls e-assistants like Siri and Amazon’s Echo “simply insane from a privacy perspective.”

The problem is magnified all the more, he adds, since “a staggering variety of low-cost spyware for sale” exists which allows anyone, government or individual, to “glean information” if they are determined to do so.

Yet more and more priests are taking their phones into the confessional, because they find the portability and ease of a smartphone more practical for praying the Divine Office than carrying a hardbound book. Similarly, penitents sometimes prefer to use a phone app to make an examination of conscience before their confession, and often they bring that app with them into the confessional, to easily reference their sins.

Fr. Pinsent and others are therefore keen that the Church look into these issues in more detail, and that bishops be provided with expert advice based on the necessary technical expertise.

Facebook “listening” technology uses the same algorithmic technology that allows your smartphone to identify a song playing in a restaurant. The phone uploads “waveforms” of ambient sound picked up in its microphone, then compares those waveforms to a massive database of nearly all recorded music. When it finds the match, it reports it back to you. This is all accomplished nearly instantaneously. These same “listening” algorithms now track certain words or phrases as they are picked up on the phone’s microphone. So, if you are talking with a friend about taking a trip to New Zealand, the algorithm will hear and identify the words “New Zealand,” and then populate your Facebook or Google advertisements with content relative to New Zealand tourism. These same algorithms could very easily be programmed to record data after picking up the sound waveform of the words, “Bless me Father, for I have sinned…”

Facebook admits that the app is capable of listening to what is happening around it. But after a series of complaints, on June 2, 2016 it issued a statement saying it doesn’t use a phone’s microphone to “inform ads” or “change” information in news feeds, and that it is “not true” that it is “listening to people’s conversations in order to show them relevant ads.” Rather, it says it shows ads “based on people’s interests and other profile information – not what you’re talking out loud about.”

But even if Facebook doesn’t “listen in” to conversations, that doesn’t mean that others don’t or can’t. Devices like Amazon’s Echo do listen all the time, unless muted. A simple way to avoid such “eavesdropping,” particularly in the confessional, is to disable access to the microphone. Or just leave your smartphone at home, in the car, or with a friend or family member for a while.

To see who’s potentially “listening” on an iPhone, just go to Settings>>Privacy>>Microphone, to view the applications that have requested access to the microphone in your device. If you don’t like the idea of apps having access to your microphone, you can turn them off until needed.

The issue of surveillance and recording confessions is not a new one for the Vatican.

In 1988, the Congregation for the Doctrine of the Faith addressed the general issue of recording sacramental confessions in a document called “decretum de sacramenti paenitentiae dignitate tuendam” (Decree regarding the excommunication of those who divulge confessions) [AAS 80 (1988) 1367]. This brief document set out the general principle that recording a sacramental confession “by whatever technical means” is a “more grave” crime [meaning “there is nothing worse”], one which so directly touches the dignity of the sacrament that it is considered, in a certain sense, a crime against the faith and is, therefore, reserved to the Congregation for the Doctrine of the Faith. In other words, if someone is accused of this crime, only the CDF can resolve the matter. It is placed in the same category as the sexual abuse of minors, heresy, and apostasy.

The crime also includes the “malicious diffusion” of what is said in a sacramental confession, by either priest or penitent, whether true or false.

These norms were established long before the advent of smartphones and certainly before any technology that could remotely — and without alerting the owner — activate a microphone or recording device. These norms are, however, general enough to cover the current situation. Listening is not the same as recording but the same principle applies. If someone is listening and shares it, it is a malicious crime.

A Vatican official who specializes in such matters told Aleteia that only a priest is bound by the seal of Confession. Anyone else who has overheard the information revealed in the confession, though, is also bound to “secrecy” and any violation of that secrecy would be considered immoral and grave.

If a bishop wanted to stop either penitents or confessors from carrying their cell phones into the confessional, he could do so, the Vatican official explained, but the Church would not issue a prohibition until there’s a test case, he said, and it would be better if one never arose.

So is it prudent for priests to take a smartphone in with them? “No,” he said. “Prudence would be not to create a reality from a hypothesis.”

The sacred intimacy of Confession

What makes this issue so sensitive is that, during the sacrament of Confession, a person is “most vulnerable to another person, and ultimately to Christ,” the official said. “It is the moment of our greatest vulnerability. It’s only because of the seal that people are willing to come to Confession; there’s no way people would ever share those things otherwise.”

He noted that today’s “age of the selfie glorifies weakness,” with some displaying it on social media to gain fame, but Confession “isn’t that at all.” He said one doesn’t go to Confession to gain fame; rather, one reveals one’s weakness and sin to acknowledge it as such, and because one wants to leave it behind.

“The only thing one receives in manifesting one’s weakness in Confession is salvation,” he explained. “The seal of confession protects the intimacy in that moment of total self-revelation. It is a protection of Jesus’s gift to Peter to bind and loose.”

Precautions for priest and penitent

In light of the sensitivities and the need to safeguard the sacredness of Confession, Dominican Fr. Ezra Sullivan, professor of moral theology at the Pontifical University of St. Thomas Aquinas in Rome, said the penitent has an “obligation to turn the microphone off” to ensure that “his or her privacy, and that of the priest, is preserved, so that no app-developer could listen in to that sacred moment.”

He also made the further point that while waiting for a penitent to come to the confessional, a priest “has a unique opportunity to pray for future penitents, to prepare himself to receive enlightenment as to how to advise penitents, and to beg God to bring more penitents to the sacred mystery of reconciliation. If a priest uses his phone to check email or Facebook, or for other distractions, he no longer disposes himself to receive grace.”

Like for the penitent, some therefore believe it’s best for a priest to leave the phone behind. “A telephone’s place,” said Fr. Hajj,  “is in the sacristy drawer, put on silent, during ministry.”