Bringing back the dead… Catholic style 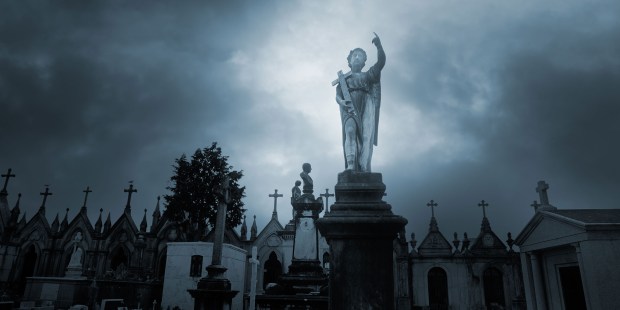 Move over, spooky Halloween traditions; in this walk through a dark cemetery you may encounter something life-changing

Forget about ghosts and goblins on Halloween; how about a walk through a dark cemetery where dead people who once walked the earth appear out of nowhere and talk to you about life and death, heaven and hell?

The “Back from the Dead Cemetery Walk” in Emmitsburg, Maryland has provided such an experience every October for the past 12 years. Held in the historic cemetery on the grounds of the St. Elizabeth Ann Seton Shrine, it’s the brainchild of Fr. Brian Nolan, chaplain for Mount Saint Mary’s University.

The idea for the walk was inspired by a haunted house at Mount Saint Mary’s, where students would meet Frankenstein, Dracula, etc.  It was controversial among seminarians because of its secular nature, but Nolan says the justification for it was that, “first we spook the college students, then we evangelize them. At the end… the Legion of Mary handed out rosaries and prayer cards.” But he remembers thinking, “Why can’t we create something that would help college students learn about their Catholic faith on questions of the afterlife, angels, and the saints who showed us how to live the Christian life?”

Eventually, that’s what he did. A few years after his ordination, Nolan – who’s been involved in theater over the years — began writing the scripts for a “Back from the Dead Cemetery Walk,” which he calls an “evangelization drama.”

Nolan wanted it to be “inspiring, encouraging, and prayer-provoking.” He intentionally avoided controversial theories of the “Last Things” in the scripts and instead used references for private revelation from sources like St. Teresa of Avila and St. Catherine of Genoa, mainstream teaching of the Catholic faith, and stories from the lives of the saints about how to love God and neighbor.

Nolan attributes the notion of this Cemetery Walk to St. Francis’ approach to spreading the Gospel.

“He was the first to promote a ‘live Nativity’ during Christmastime, and also encouraged the faithful, for whom the vast majority would be unable to make a pilgrimage to Jerusalem, to meditate on the Way or Stations of the Cross during Lent,” explains Nolan. “The Cemetery Walk extends this idea to evangelizing our culture during the month of October. When the secular world is speaking about ‘the afterlife, the dead and demons,’ this program helps one reflect on preparing to meet our Lord, living the theological virtues of faith, hope and charity and the reality of both the good and fallen angels.”

So what exactly does a person actually experience on one of these walks?

Perhaps it goes without saying that it’s held in the dark. You must reserve tickets for the free event in advance and then groups of 8-15 people are let in at a time, greeted by a lantern-carrying grave digger who welcomes the participants and sets the stage for what they’ll encounter. During the approximately 40-minute walk, many familiar people show up, like St. Therese of Liseux, St. John de Brebeuf, St. Maximilian Kolbe, St. Elizabeth Ann Seton, St. John of the Cross, St. Gianna Molla, and St. Teresa Benedicta of the Cross (Edith Stein). There are souls in purgatory, two young children from heaven, and even a Screwtape devil. Sometimes these characters even know participants by name, which enhances the personal experience, and provides an extra surprise.

The drama is designed that way — to move participants and inspire them, as well as to help them ponder death, judgment, heaven and hell. One woman told Nolan that her friend went on the walk and was changed. “He was crying about it. And the next day he forgave somebody who he had not been able to forgive,” she said.

The actors themselves — who are integral to the success of the dramatization and are usually amateurs as well as people of faith — are themselves changed by the experience. “We have many seminarians participate, and some actors return year after year,” says Nolan.

The Walk has grown every year in Emmitsburg without much advertising and this year it will be held over five evenings to accommodate the growing interest. Other groups around the country are now beginning these Cemetery Walks, too. The Back from Dead web site offers a packet for sale for those who want to start one —  a “soup to nuts” guide which includes scripts for the actors, advice about costumes and staging, and details of how to plan one. Each year the packet is updated, but a one-time purchase of $75 provides lifetime access to all updates and additional info.

The Back from the Dead Cemetery Walk provides a thrill for all those who enjoy the spooky elements of Halloween, but within a Christian context. Ultimately, though, Nolan says it’s an invitation to live a life of holiness and faithfulness.